Thirty-one years after his first visit, Andrew Sharp returns to Katavi National Park, in the remote far west of Tanzania, to see if it still has the same magic. 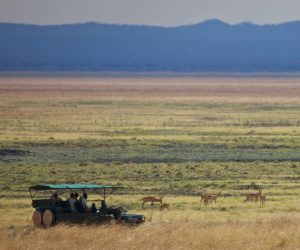 HR-Sharp-VehicleIt was June 1983. My wife and I were young, venturesome and travelling from Zimbabwe to Uganda in a Land Rover that was scarred from the Rhodesian war years and weighted with mine-proof steel plates bolted to the footwells. The road north through remote western Tanzania was deeply rutted, dusty and deserted, and for six hours we ground our lonely way past miles of miombo woodland whose dry leaves seemed primed to catch fire in the heat.

Inside the vehicle we sweltered, with the windows shut to prevent an invasion by the tsetse flies swarming furiously around the spare wheel on the bonnet. There was no air con in those days. As evening approached, exhausted and drained, we looked for a place to camp and turned off the road onto a faint, narrow track.

We ascended a low hill, but there was no let up in the thorn scrub. It seemed most unpromising. Little did we know that we were about to stumble upon one of the most alluring places in Africa.

We crested a sandy ridge and came to a standstill, stunned by the sight that opened up before us: a vast open expanse stretching to the horizon, verdantly green and threaded with silver waterways, streaked in black by huge herds of buffalo and liberally humped with hippos and elephants, all under a soft, pinking sky. We had arrived at Katavi, one of three floodplains that form Katavi National Park, the third largest in Tanzania.

Later, watered and cool, and breathing in the honeysuckle scent of nearby mahogany blossom, we lay in our little tent listening to the stealthy army of hippos grazing all around us. Out on the dark plain, under the bright constellations, lions rocked the night with their roars and hyenas yodelled. It was probable that we were at least a hundred miles from any other human being. This, surely, was the wild whose call the nineteenth-century explorers and hunters would have felt. We vowed that one day we would be back.

It took us more than thirty years to fulfil that dream. This time there was no gruelling journey to make. We could now afford to fly in with a safari company, and would be ‘glamping’ rather than crawling into a two-person tent. Despite our comparatively luxurious transport we still caught a sense of Katavi’s remoteness as the Cessna made its way west from Dar es Salaam. En route we landed on dirt airstrips to drop off fellow tourists in Selous Game Reserve (described in guidebooks as ‘remote and wild’) and then in Ruaha National Park (‘even remoter and wilder’), and then flew for another two hours with barely a scar of human habitation below. Still we wondered if our memories of Katavi were rose-tinted or whether our Eden was gone. Three decades is a long time in the modern world.

After the steep Mlele Escarpment on the park’s eastern boundary came into view we descended in a gentle arc, down to the tiny airstrip, our eyes drawn compulsively to the great floodplains spreading north and south. Our safari camp was on the edge of one of the park’s three main mbugas (or ‘marshy plains’) of the 4471 sq km Katisunga, which is, incidentally, larger than Rutland. From our canvas-and-thatch room we gazed out over the plain to distant lines of zebra and giraffe that resembled flotillas of sloops on a wide sea.

In 1983 we had been the only people camping in the park, and even now there are just four permanent tented camps. The network of game-viewing roads is confined mainly to the centre of the park. The south is largely trackless, and passing another safari vehicle is uncommon enough to prompt mutual interest. We explored our wilderness, armed against the flies with Dettol spray, fly whisks, Maasai blankets and smouldering elephant dung in a pot on the back of the four-wheel drive. Katavi isn’t famed just for its insects but also for the huge pods of hippos that crowd the Katuma River. Nothing prepared us for the gloriously thick muck and muddle of such tight presses of the beasts. Stubble-headed marabou storks stood, hunched as always, wobbling their fleshy gular sacs and relieving themselves shamelessly on their hosts. Forced into ever-smaller stretches of dark-brown, glutinous water as the dry season progressed, the hippos grunted and jostled, sharing their pools uneasily with five-metre-long crocodiles.

At night, sitting around the fire at Foxes’ Katavi Wildlife Camp, Nick Greaves (camp manager, writer, photographer and all-round bush expert) traced for us the constellation of Scorpio that arched over the plains like an ancient and wise protector. Katavi abounds with big beasts such as lion, roan antelope, buffalo, elephant and more. But when our guide showed us the clever architecture of a weaver’s nest, we had an overwhelming sense that every single blade of grass in the wide expanses of the park, living and dead, and indeed every invisible bacterium in the dung-enriched earth, every ant, tsetse fly, scorpion, mongoose, sandgrouse, wild sesame, acacia and palm, is vital for the health of the whole ecosystem and its astonishing biodiversity. While tracts of our world such as this remain, there seems hope for the survival of our planet.

Our six days in the park were not long enough to explore its far reaches, but we could not leave without attempting to find our campsite from thirty years before. It’s a two-hour drive from Katisunga to the Katavi plain, travelling first south and then west around the huge floodplain, before finally heading north. There is no convenient shortcut. With our guide, Whiteman, we started early, to avoid the tsetses, and journeyed through beautiful forests of umbrella acacia, ashy-barked marula and then Cape chestnut, their pale branches stretching gracefully upwards into the blue sky. Even the stinging flies could not dampen our mood as we drew closer to our destination.

We finally joined the old main road that we had taken three decades before. It was still dusty and bumpy: that much at least had not changed. The side track was instantly recognisable, though now it was signposted ‘Lake Katavi’, raising our excitement to new levels. Slowly we crested a sandy ridge and — yes! — the same stunning sight, just as we had remembered it, crossed with strands of water, despite it being so late in the dry season. We found the precise spot where we had camped in 1983, recognising the lie of the land and remembering the crackle of the leaves under our groundsheet and the sweet aroma of mahogany blossom.

Soon coffee was served, and we sat and watched waterbuck and baboons sipping from the water channels while a 25-strong herd of male elephants lumbered past.

On the far horizon zebras shimmered in the sunlight. A pair of noisy blacksmith lapwings harassed an African marsh harrier that was hunting for eggs, just as they have done in Katavi for tens of thousands of years. It seemed then that three decades was not such a long time to have left it to come back.

Andrew Sharp and his wife travelled with Africa Odyssey https://www.africaodyssey.com/

Ode to Katavi
The scenery here is spectacular, both in scope and drama. The Katuma River flows into Chada Lake, an amphitheatre framed by the Mlele Escarpment. Wedge-shaped Kipapa Hill stands sentinel over herds of animals that roam the region in a never-ending quest for grazing. And faraway horizons, bruised purple at dusk, remind you that you’re tucked under the western arm of the Great Rift Valley.

Katavi shouldn’t be beautiful — its remoteness and wildness should give it teeth — but with its tamarind trees blushing at the prospect of rain, the marula, terminalia and pod mahogany trees shivering with similar anticipation, the rattle of the parchment fronds of borassus palms and the long pod cassia festooned with sunshine-yellow blooms, it is. Very.

But it’s scorched. Its low elevation means it’s simmering. You can hear it in the pressure-cooker hiss of a thousand invisible cicadas. You can see it when mirages dance an agitated, shimmering distortion at the edge of the earth. You can feel it when your hair sticks to the back of your neck. The sky seems to be pulled taut, with a few faint, teasing wisps of cloud that are nudged along by the reluctant exhalations of an enervated breeze. The savannah is the colour of cracked poppadums. The star-chestnut trunks are bleached bone white.

Elephants lumber down the Katuma’s bank to drink and slap mud onto their sunbaked skin. Crocodiles snap shut jaundiced, malevolent smiles and then slither into the water as you approach. Lions snooze in the shade of sausage trees, observing rare visitors with slit-eyed interest. Everything pants, willing the rain to hurry up.

Safari Planner
• Getting there The writer travelled with Africa Odyssey, who can arrange all your transport and accommodation. By road, the journey from Dar es Salaam to Katavi takes three days. Safari Air Link flies twice a week from Dar es Salaam to Ruaha, Katavi and Mahale on Lake Tanganyika, and many travellers visit all three parks on one trip.
• Where to stay The two longest-established camps are Foxes’ Katavi Wildlife Camp, on the edge of the Katisunga plains, and Chada Katavi, run by Nomad Tanzania. Alternatives are Flycatcher Katavi Camp, Palahala Luxury Tented Camp and Katuma Katavi Tented Camp. All include game drives and most offer fly-camping adventures.
• When to go In the dry season (May-October), when the floodwaters retreat and animals congregate around the rivers.
• Health Check with your doctor or a travel clinic at least two months before you go to be certain which vaccinations are currently required. Antimalarials are essential and tsetse flies can be a nuisance, so be sure to pack effective insect repellent.