Luxury on a Tanzania safari is rather a subjective term depending on exactly what kind of luxury experience you are after.

Your different options are either staying in a mobile tented camp, or a permanent lodge in the Serengeti to catch the migration. Both are fabulous options, let us break them down for you so you can decipher which one is for you. 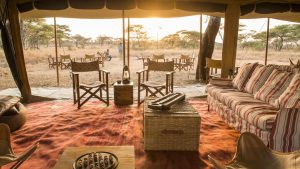 @Nomad’s Serengeti Safari Camp is our favourite mobile camp in the Serengeti. It is exceptionally well positioned to catch the migration, as it moves two camps between 3 locations throughout the year.

The term “mobile camp” can be deceiving when looking at tented options in the Serengeti. These are usually very well placed for the migration , as most move between two locations throughout the year; one in the northern Kogatende/Lamai area for the famous river crossings from July – October, and the other location in the Ndutu area near the south of the park for the calving season from December – March.

These are stand alone and en suite luxury tents. You have an en suite bathroom with a flushing loo and a “bush shower”. A bush shower is perfectly hot, but comes from outside the tent in a bucket which is filled up as you shower by a member of staff. Essentially, you are not compromising on quality when staying in a mobile tented camp, though it does have some quirks such as the shower and being under canvas which you would expect from safari accommodation. These are probably our favourite options in the Serengeti, as they are often very intimate, well ran and with a focus on exceptional guiding and an overall excellent safari experience. Some are slightly more polished than others, and the prices of each of our favourite options reflects this.

The step up in terms of luxury is (usually) the permanent camps. These have a similar structure to the mobile camps, often also with bucket showers and canvas, but have one set location year-round. However, they often have wooden floors and raised decks, giving a slightly more permanent structure, which some find comforting. There are some exceptional camps which operate like this, especially in the central Serengeti area. In the Migration’s transitional month’s such as June and November, where the herds are somewhat dispersed around the central Serengeti region, these are great options to combine with a mobile camp to give you the best chance of catching the herds. Saying that these are more luxurious than the mobile camps as a whole is a little bit of a sweeping statement, as many mobile camps offer more luxury than the more mid-range permanent camp options… Something to bear in mind! 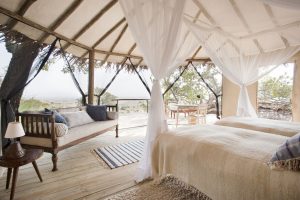 @Nomad Lamai is an excellent permanent lodge located in the Northern Serengeti region; perfect for a July-October Great Migration safari when the herds are in the area and crossing the Mara River daily.

The most classically luxurious option for a Migration safari is the permanent lodges. The best permanent lodges are located in the Northern Serengeti so you should consider these when the herds are here from July – October (also when the famous river crossings are taking place). We would not suggest placing yourselves in these locations at other times of year though if your priority is to catch the Migration, as they simply won’t be there! You can not get a more luxurious overall Migration safari experience than in one of the Northern Serengeti’s permanent lodges, as when you get back from your game drive you are welcomed by all the creature comforts you could possibly need.

We hope this helps you decide on which Great Migration accommodation is more for you. The Migration’s movements can be a tricky thing to work out, so if you are unsure about whether the camp you like is in the right location to catch the migration then please do give us a ring and we can guide you in the right direction.