The Serengeti is famous for its mobile accommodation – camps which move with the herds and therefore guarantee superb Migration viewing.

In October 2010 I travelled to the Northern Serengeti to an area known as Kogatende or Wogakuria which is on the other side of the Mara River to the famous Lamai Wedge. The purpose of the trip was to visit all the mobile camps due to the fact that the last three years have seen a dramatic increase in mobile operators and it has become increasingly hard to see their differences. In the week I was in the area I visited Sayari Camp, Olakira, Serian, Nomads Serengeti Safari Camp, the new Nomad Lamai site, Lemala Camp and finally &beyond’s Serengeti Under Canvas.

Before I go into detail about the actual camps and what they do throughout the year, the Kogatende area deserves a mention in itself. I have travelled to the Serengeti many times including 2009 when I travelled as far North as Kleins Camp, but it was the first time I had ever travelled to the Northern Kogatende area. The reason for its omission is that when Kogatende is in its peak season for game viewing, Southern and Western Tanzania come into their peak season (along with the rest of Africa). As a result I have been travelling to other areas and other countries at this time of year. The stories however, of unspoilt and untouched Serengeti plains coupled with daily river crossings, good cats and recent great rhino sightings meant I was hugely looking forward to exploring the area.

And it did not let me down. The area is stunning, calved in two by the hypnotic Mara River and with so few tourists it’s a true delight. The trip saw superb game viewing including a number of different river crossings and great cats. I had a day completely to myself in the Lamai Wedge where the only car we saw was a patrol car (thanks to Alex Walker and his exceptional Serian Camp for this truly superb day). I was not lucky enough to see rhino, despite searching for two days and missed the pangolin out the back of Sayari Camp (!!). Leaving those issues aside however, I can honestly say that the area is by far my favourite part of the Serengeti and for those people thinking the Mara is the only place to see the Great Migration throughout August, September and October you could not be more wrong. The herds start coming through in early July (though the grass is too long to see good cats). From 1st August onwards there are wildebeest everywhere, staying in the area till they return at the beginning of November. In my week in the area there were wildebeest absolutely everywhere. In summary I would highly recommend travelling to this area at this time of year. However it is important clients take on board the fact that you are limited to what activities are on offer- in my view this is a game drive only area and although walking is offered it is poor compared to what is on offer in the Southern and Western parks. 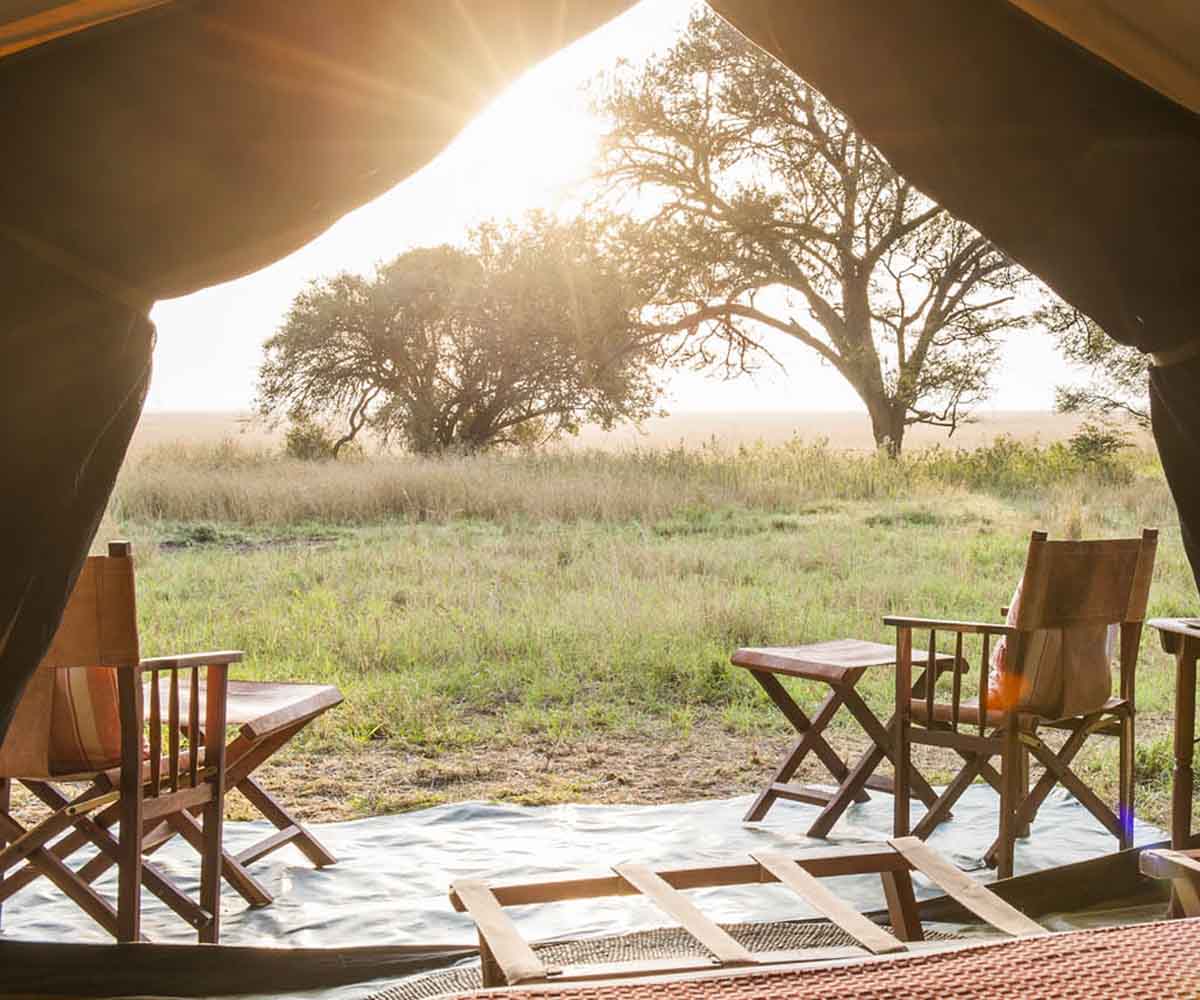 To make things a little clearer, I’ve decided to split the mobile camps into 2 subgroups: those which I consider to be ‘truly’ mobile and those I call ‘semi’ mobile – moving occasionally, mostly only once in the year.

The ‘truly’ mobile camps move locations at least 4 times every year, importantly moving into the Western corridor of the Serengeti for May and June and also into the Seronera area for mid November early December. Operating in these areas gives their clients the best locations for camps at any time of year and for that reason alone they have to be considered amongst the best of the parks accommodation. It is also worth pointing out that moving is expensive and time consuming, proving that both companies put clients needs above maximum profit!

The only companies that we consider truly mobile are Nomad Tanzania (specifically the Serengeti Safari Camps) and &Beyonds Serengeti Under Canvas Camps. However Asilia Safaris deserve a mention here due to their clever location of the permanent Dunia Camp. Dunia gives their clients an option for mid November and early December meaning that it is only for May/June and early July that one of their camps (whether it be Olakira, Dunia or Sayari) are not ideally located.

The ‘semi’ mobile camps tend to move between Ndutu in the far South of the Serengeti and Kogatende in the North. Ndutu is the place to be between mid to late December and up to mid March, beginning of April when the herds move into the Southern plains to calve. Kogatende is a great option from the 15th July (when the herds move towards the Masai Mara, crossing the Mara river) and the end of October/very beginning of November (when the herds push South again). These long periods also coincide with the busiest times of year, meaning that the camps are making use of peak season periods when they are at their most profitable. The semi mobile operators are Asilia’s Olakira Camp, Alex Walker’s Serian Camp and Lemala Camp.

Nomad Tanzania’s Serengeti Safari Camp (there are 2 of these Nomad camps in the Serengeti) is an authentic 6 roomed safari camp that heavily focuses on the safari experience rather than the luxurious experience prioritised by others. The guiding here is set exceptionally high, with the majority of guides having a wealth of experience in the Serengeti alone. (Don’t underestimate this, it can genuinely make a very big difference!) Nomads are also one of the only companies to offer private safari, each client having his own vehicle, albeit a closed sided one. In summary, a very good option for clients looking for an adventurous safari and great guiding.

&Beyond’s Serengeti Under Canvas camps each have 9 rooms and are by far the most luxurious of the mobile operations (semi mobile included). The rooms are slightly smaller than other camps but the sheer quality of product is undeniable, and the fact that &Beyond carries huge weight in the industry means that they seem to get the pick of the mobile campsites; locations are simply superb. The quality of guiding here is also set VERY high and food and service is pretty much impeccable. Their camps are also rare in the fact that they have very good communal areas, with enough comfy sofas for every guest to crash out in the heat of the day. It is only a little thing, but not every camp can say that! &beyond’s vehicles are also pretty much the best of them all. Roll back roofs, and roll up sides mean that the vehicles are open enough to guarantee good viewing yet can be closed up if the heavens open. The only negative we can find about &Beyond’s Under Canvas product is that they do not offer private safari – its available, albeit for over a $500 fee! 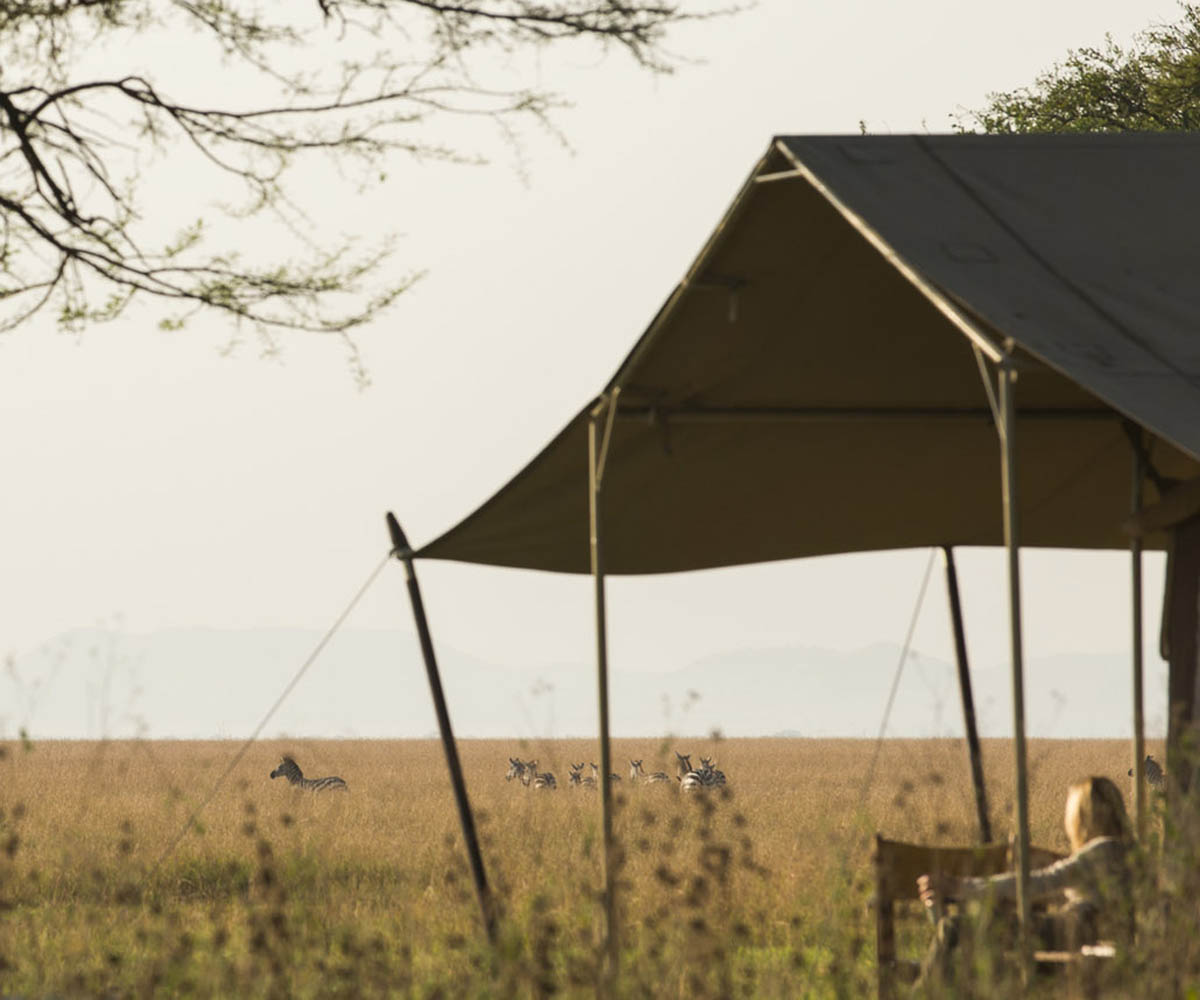 Alex Walker’s Serian Camp is a fantastic authentic safari camp that’s new to the Serengeti. Alex is famous for a long guiding history in East and central Africa as well as his camps Serian and Ngare Serian in the Masai Mara. He currently hosts and guides at the new mobile Serengeti product and has become an immediate success. His 6 roomed camp usually runs at only 4 rooms and is therefore the smallest Serengeti camp. It is also the only owner run property in the entire Serengeti and one of the very few left in Africa. Like Nomad Tanzania’s Serengeti Safari Camp, Alex offers private safari with each client having their own vehicle. They are also the only company in the Serengeti (and again actually one of the only camps in Africa) to have a spotter and guide on each vehicle, maximising game viewing.  Serian offers a different product to everyone else in that the majority of Serian’s guides (and Alex himself) are ex hunters, and many from the local areas and tribes he works with. As a result, the guiding level is set very high and the camps staff and guides have serious bush experience, with little contact with tourists. Their character is truly genuine and very refreshing!

Asilia Safaris Olakira camp is one of the Serengeti’s best value camps. With 8 rooms Olakira is one of the larger mobile camps but this fact takes little away from the quality of product; the tents are incredibly spacious and much more luxurious than people expect from an adventurous mobile operation.  As with &Beyond, Asilia now have gravitas in the industry and Olakira’s location tends to be seriously good. Their Kogatende location looks over a bend in the Mara river, a focus point for some of the Migrations biggest river crossings! The vehicles are fully open sided giving guests great viewing. However, having said that, our only negative is actually with the vehicles – when Olakira is full their vehicles are too, often with 6-7 clients in each vehicle!  Offering such great value has its sacrifices…but overall, this is a seriously good product.

Lemala Camp is a fairly new semi mobile camp operation run by the Kenyan company Grumeti Expeditions. Priced at roughly the same rate as Asilia’s Olakira Camp, Lemala is undeniably good value and they also offer open sided vehicles that unquestionably give the best overall viewing (if the rains stay away!). However, on our last visit to camp we found that the camp lay out was simply not well thought out, with all tents having zero privacy. Couple this with the fact that Lemala is the largest by far of any mobile camp, and that the quality of Lemala’s direct competition (Olakira, Serian and Nomads) is currently so good, we tend to favour alternatives for our clients. The little extra that the other camps cost is so worth it!