What to pack on Safari

“What should we be packing for our safari?”

This is one of the most commonly asked questions when starting to think about a Tanzania safari. Knowing what to take on safari is vital for getting the most from your trip.

No matter the season, there are a handful of essential items that you should take, although your essential items might differ on what you want to get out of your safari, we generally recommend the following: 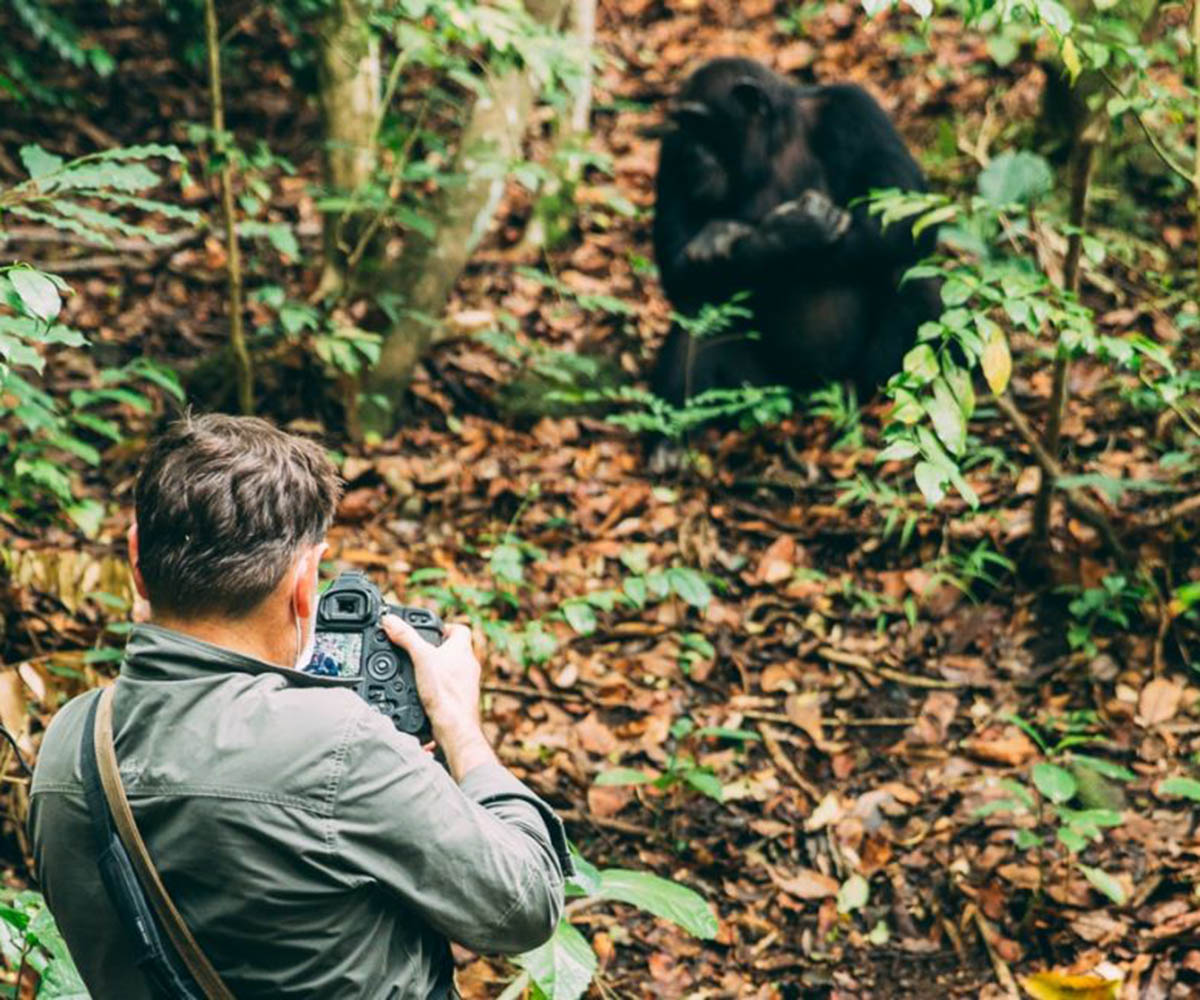 Your ‘essentials list’ will differ depending on what you want to get out of your trip. © Nomad Tanzania.

These months signal the dry season when game viewing is at its best. In the North of Tanzania, July sees the herds of wildebeest arrive in the Kogatende region of the Serengeti and start to cross the great Mara River on their Great Migration. Millions of wildebeest struggle against the water’s current and the lurking predators as they follow the greener pastures. Whilst the Masai Mara becomes extremely busy during this time of year, the Serengeti is a calmer place to be and the sightings are still just as good! Contrary to popular belief, not a huge amount of the wildebeest enter the Masai Mara so you’ve got fantastic chances of seeing a river crossing in the Serengeti. 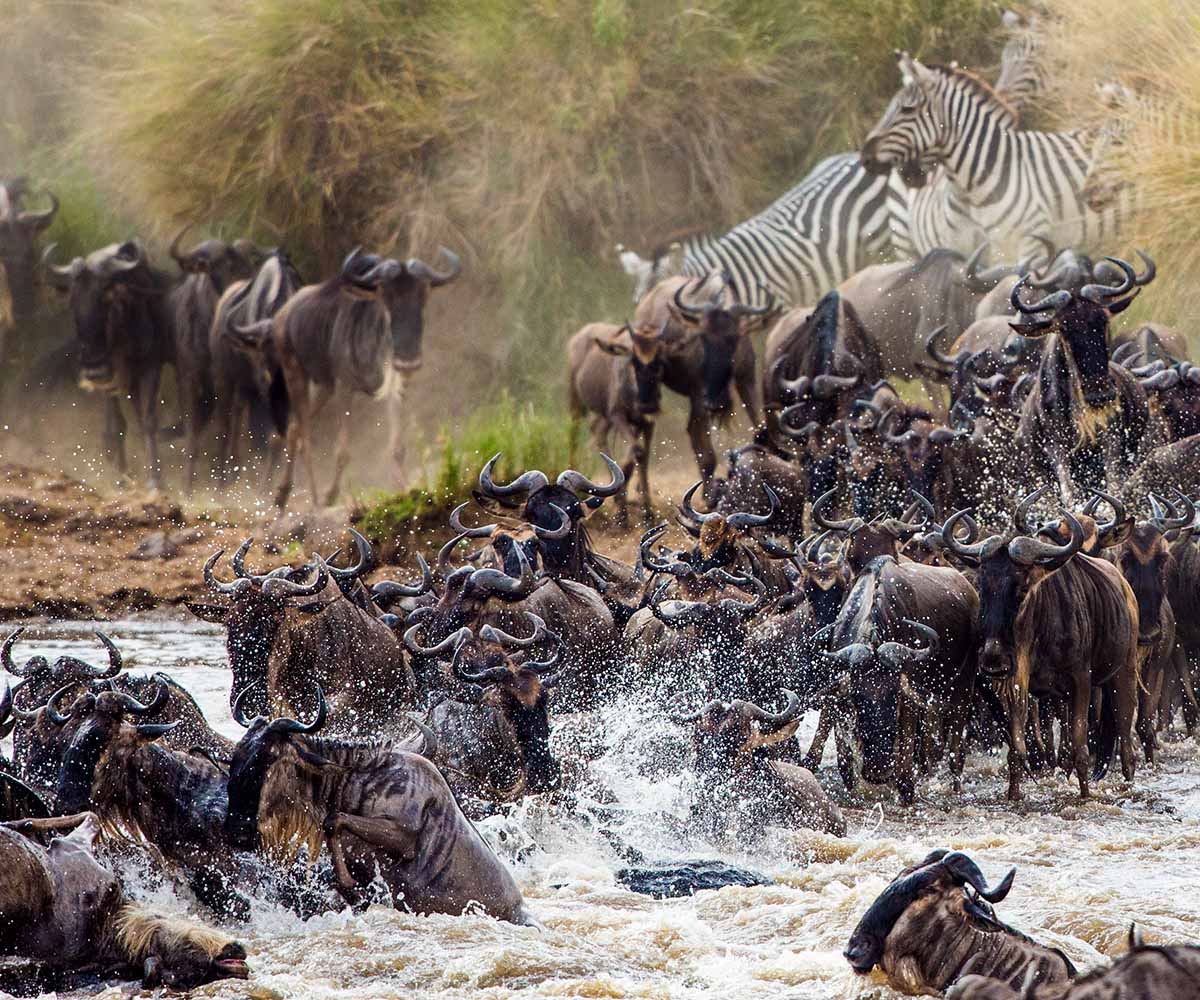 One of the best spectacles on Earth.

As the dry season progresses in the South of Tanzania, Selous and Ruaha’s game viewing becomes concentrated and fantastic. Whilst the Selous’ waterways largely remain open, Ruaha becomes a barren and dry landscape. Buffalo congregate in their thousands near the already depleting waterholes and the large lions prides that Ruaha is famous for, take full advantage of the weakening bovines. Ruaha’s dry season is famed for its battles between these two giants and it is in the peak of the dry season when this tends to occur most.

Although you won’t be needing any waterproof gear during these months, the days are full of sunshine and clear skies, yet this means nights are slightly cooler across the whole country, so bring plenty of layers. Scarves and hats as well as long sleeved clothing should be packed especially if you’re heading to the Ngorongoro Crater which gets cold at night during these months. 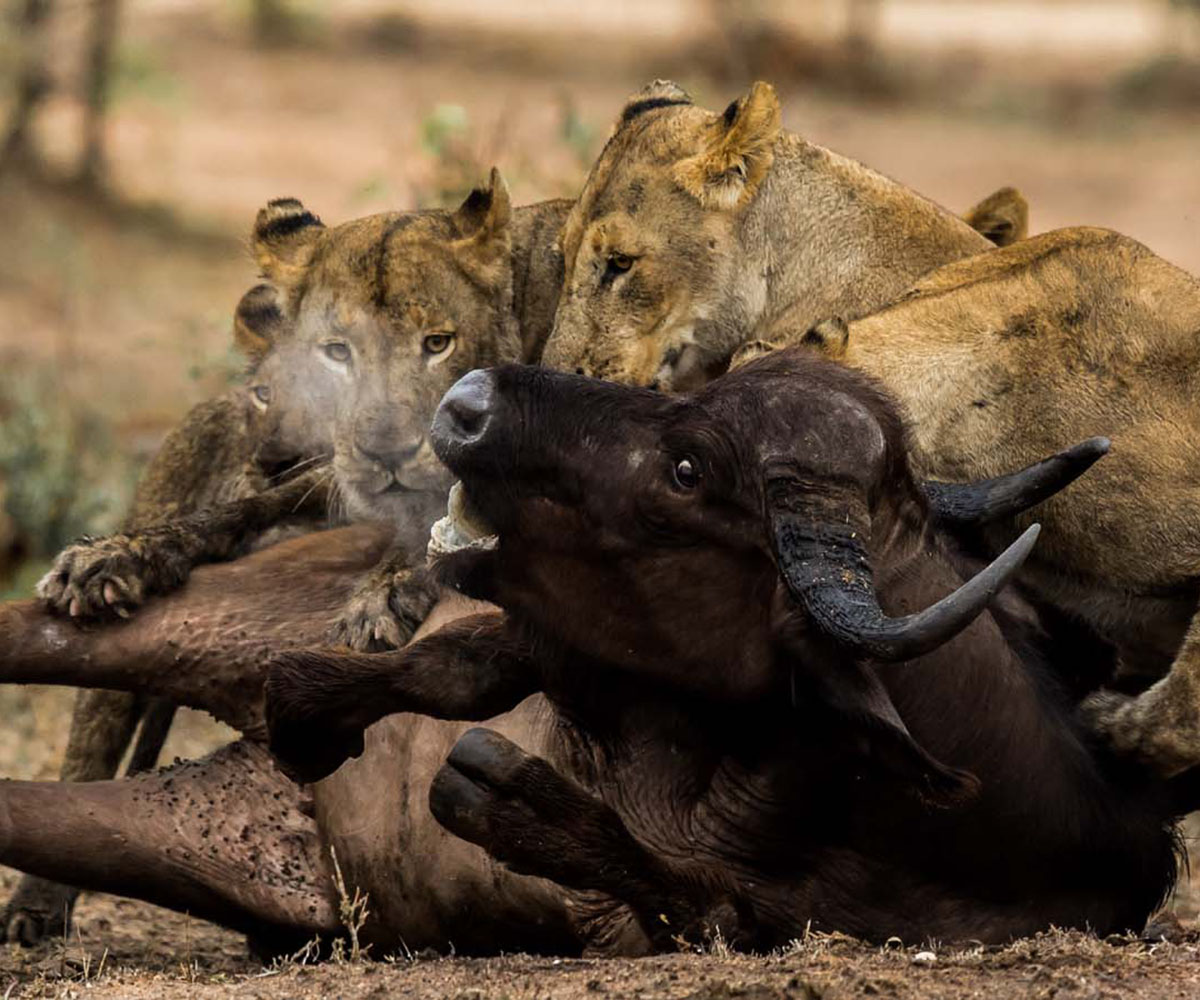 This is also the best time to see the chimps of Mahale. Whilst staying at Nomad’s Greystoke Mahale, the primates tend to follow the fruiting patterns of the area and during these times they tend to converge lower down the slopes in the dry season where the fruit is ripening. As well as it generally being easier to find the chimps, the temperatures are great for relaxing by the lake without it being too hot or too cold. Strong walking boots are definitely a must-have item when visiting Mahale. The chimps can be up to a few hours trek away so walking boots must be packed!

Towards the end of the dry season, the temperatures start to rise, as does the humidity. You shouldn’t be needing layers at the beginning of November!

As the season progresses, there is the small chance of rain so bringing a light waterproof would be very handy to have – just in case. 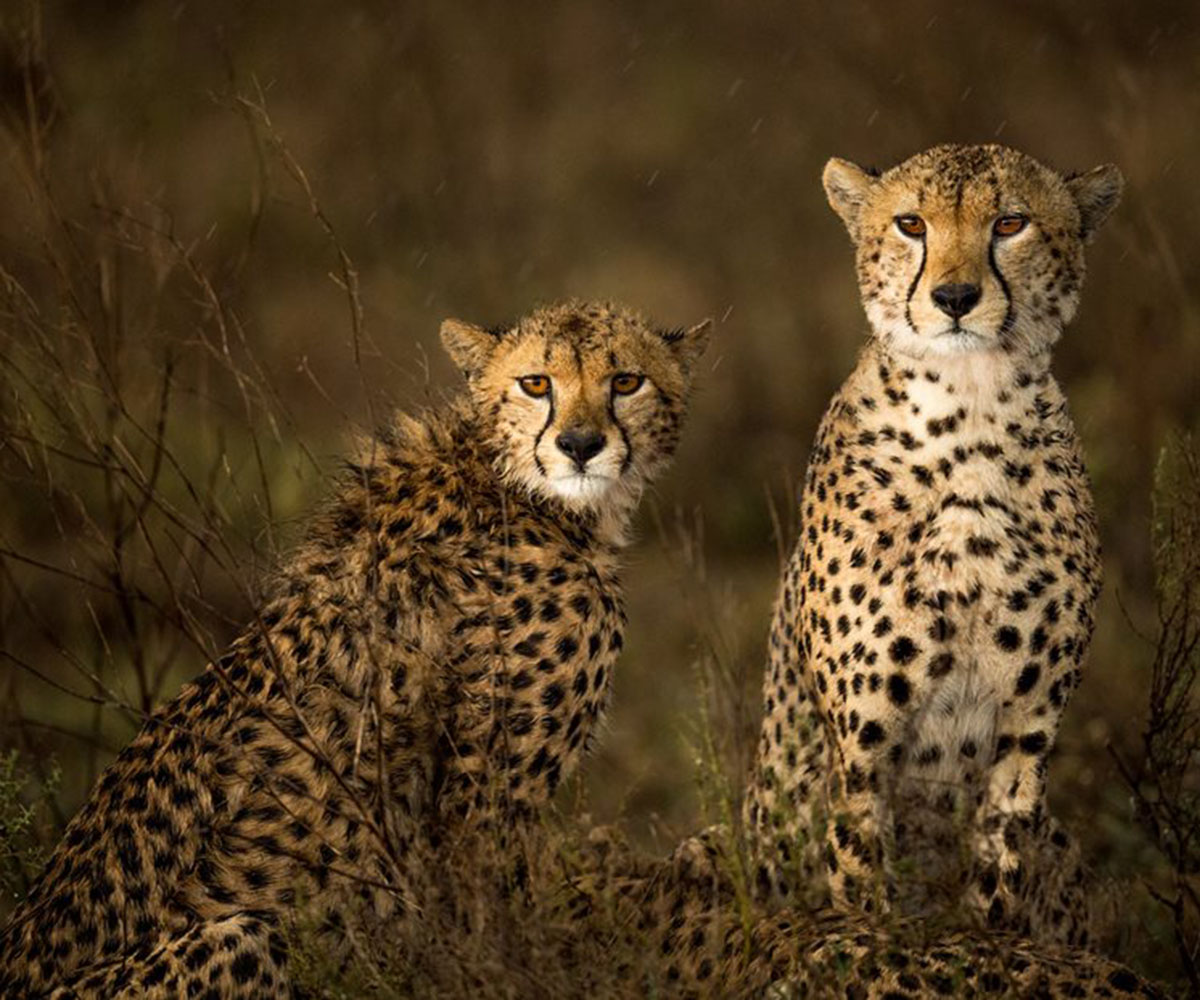 A bit of drizzle can make for some great photos. © Asilia

The hot weather and potential rainfall doesn’t deter visitors though and December through to January is one of the busiest times of the year. As well as it being the festive season, January and the beginning of February sees the calving season on the Ndutu plains in Southern Serengeti. Here you have the chance to see the wildebeest, when their numbers together are arguably at their most, giving birth and the life and death struggle of their day to day lives.

The South of Tanzania isn’t as popular during these months. The weather is very humid and the short rains cause the foliage to become thicker and denser. This low season does however allowsfor some brilliant rates at camps such as Jongomero and Nomad’s Sand Rivers.

As with most safari holidays, it is best to pack for all types of weather as you never know what to expect!

The south and west of Tanzania shuts from the middle March through to the end of May. The Reason is that the heavy rains arrive making many of the roads impassable. The rivers swell and the landscapes become lush green utopia’s where migrant birds sing and flowers bloom.

Although the rain in the North of Tanzania is still very prevalent, many of the camps stay open and offer some exceptional Green Season Rates. On offer is some brilliant game viewing without the crowds in the Peak dry season and lodges like Asilia’s Namiri Plains and their Highlands accommodation in the Ngorongoro Conservation Area. April sees their rates that are generally over $1,000 per person per night, drop to about half of that! 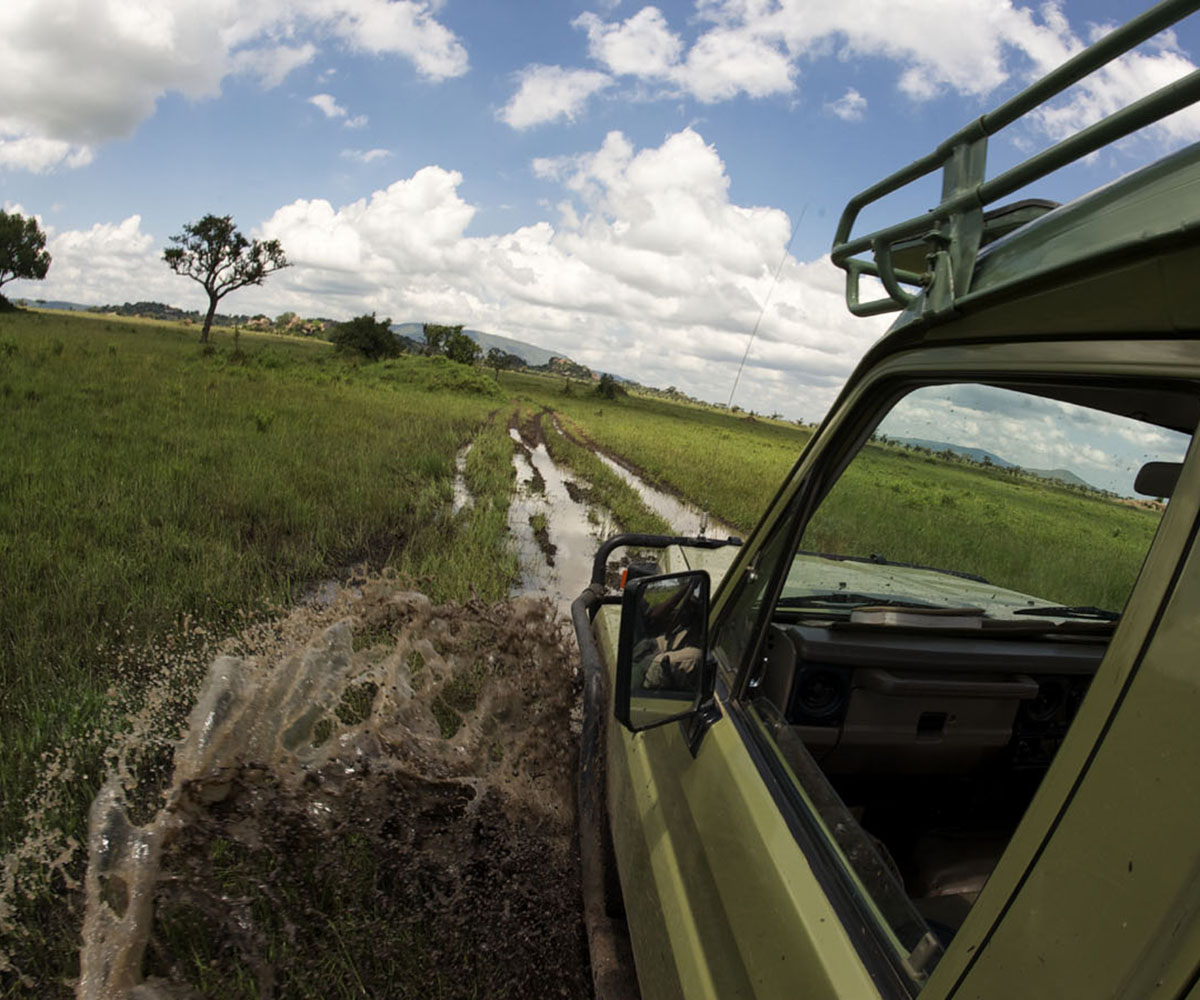 Due to the rains, there are a few essential pieces of clothing that are certainly worth remembering to take with you. As well as all the other safari necessities like hats and sunglasses (these are still needed due to the sunny days), waterproof clothing and closed-toed footwear is essential.

If you are looking to plan a safari, or have already planned one, have a look at when it best to go to Tanzania but make sure you contact us, our experts would love to chat about your plans.

Money advice guide for US holiday makers heading to Tanzania

What to do in Tanzania

Tips on how to avoid insect bites while on safari

Tanzanian Food: 5 Foods to Try when in Tanzania

How to plan a Tanzania Honeymoon …