Where are the herds in November?

The likelihood is that at the beginning of November, the herds are still lingering in the northern Serengeti regions of Kogatende and Lamai and you can still catch river crossings at this time. Towards the end of the month, by the time the light rains have begun, the wildebeest begin to descend south in their second big migration of the year. On their descent south the splinter off into different parts of the Serengeti, so at this time it can become tricky to predict where the “mega herds” will be.

Is November a good time to see the Great Migration?

Especially early November is still an excellent time to catch the river crossings and some mega herds, as much of the time even when some are pushing south, many are still around the Mara River in Kogatende and Lamai. However, October is probably a little better, as they do begin to disperse when the rains fall so the more you go into November, the more the herds spread out.

Towards the end of the month, river crossings are much less frequent as most have begun to disperse south. However, because of the light rains, the camps and lodges are exceptional value for money… We cannot stress this enough! You can stay at some of the continent’s most luxurious permanent lodges in November at half the price they would be in July and August, and still be in with the chance of catching scenes such as this (shot by a member of our team in November a few years ago). As well as this, the parks are a lot quieter so you get a little slice of Serengeti wilderness all to yourself. All in all, if you don’t mind getting a bit wet and love value for money, then early November in particular is a fantastic time to see the migration.

So, where should I stay to get the best chance of catching the herds in November?

In early November, we would suggest basing yourself in the Kogatende and Lamai areas of the northern Serengeti to give yourself a chance of witnessing a late river crossing. In the second half of the month, it can be a good idea to split your time between the northern Serengeti and the central Seronera region of the park. As the herds disperse, many will head down towards the centre of the park so if you are set on catching the herds, this would be a good combination of locations. This way, even if the herds haven’t quite made it down to central Serengeti, you would have most likely caught them in the north. Aside from the migration, November is an excellent time to make the most of low rates and have an exceptional value Serengeti safari, with no other vehicles. Seronera is usually really busy in the peak months, so visiting here in November gives you a seriously spoiling more private stay in an area that in peak months is so popular (due to it’s phenomenal resident game). 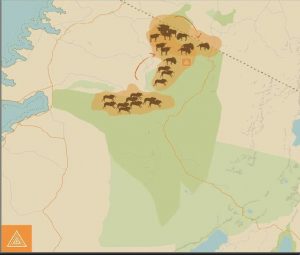 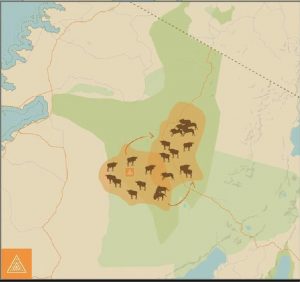 Which permanent camps to stay at in the northern Serengeti (Kogatende/Lamai) for a November safari?

Sayari ($784 pppn) – Sayari is serious luxury under canvas. Its permanent wooden base structure offers a really nice contrast to the purely tented mobile camps. The main area is fitted with comfortable sofas and there is also a lovely pool to chill out by in between your game drives. It’s location is close to the Mara River making it a great place to stay to catch the crossings.

Nomad Lamai Serengeti ($760 pppn) – In a similar position to Sayari, Nomad Lamai is an excellent lodge to stay at if you are hoping to catch the river crossings. It’s rooms are wound between a set of Kjopes, and each one has fabulous sweeping views of the plains below. Lamai offers the ultimate barefoot luxury Serengeti experience, yet without losing any authenticity.

Which mobile camps to stay at in the northern Serengeti (Kogatende/Lamai) for a November safari?

Serengeti Safari Camp ($725 pppn). Our favourite barefoot luxury authentic Serengeti mobile camp. As there are two camps which move independently throughout the year, there is no in-between period where the camp is moving locations and thus not open. Our pick for a November safari.

Olakira ($789 pppn, until closes on 15th Nov) – Asilia’s most luxurious mobile camp, it is not quite as glitzy as Serengeti Under Canvas but by no means is a less desirable option as it doesn’t come with quite such a hefty price tag. Though it certainly is not cheap!

Which central Serengeti camps to potentially combine with a northern one for a late November safari?

Kiota ($325 pppn). This is an exceptional value property. Located in Seronera, with amazing views of the surrounding plains, it is exceptionally well positioned for the excellent central Serengeti resident wildlife. It is very comfortable with lovely staff and a very welcoming atmosphere.

Namiri Plains ($893 pppn). Namiri Plains is one of the best locations in the whole of the Serengeti in our view, migration or no migration. It is set in the eastern area of the park and with only one other camp in its vicinity, hardly any vehicles venture here. This does not mean its wildlife is less prominent by any means, but quite the opposite. As a former cheetah conservation area the big cats here are extremely good. Fine food, luxury tented accommodation in a magical area; you can’t get much better than this.

Dunia ($804 pppn). Another Asilia property, and one which we love to send couples and families alike to – it suits everyone, and the all-female staff create an incredibly welcoming and warm environment. Exceptionally well positioned in a quieter area of the Seronera region, with it’s excellent resident wildlife, it is a fantastic choice.