Where are the herds in June?

The transitional period we see in May continues throughout June. By June, usually around 20% of the herds are in the western Grumeti region as they face their first obstacle on their journey; the Grumeti River. These are not where those famous huge river crossings happen though, which happens later on when the herds have reached the north of the park, and ultimately the Mara River.

The weather at this time of year can be difficult to predict, and therefore so can the wildebeest. As the rains change, the herds can double back on themselves, some may make their way to the central Serengeti, whilst others will linger for most the month in the Western Corridor, whilst a few may push north early… It is a very testing time for us to predict as it does change from year to year.

Is June a good time to see the Great Migration?

If you catch the herds, then absolutely, this is a phenomenal time to see the migration. Rutting season for the males begin in April and June is the peak of this period, which involves a lot of noise and is a very interesting time to be in the midst of the herds. Although it is tricky to predict, if you base yourself in two different camps (which we would strongly recommend you do) then you have a good chance of catching some big herds.

So, where should I stay to get the best chance of catching the herds in June?

We would definitely suggest throughout the whole of June splitting your time between two camps; one in the central Seronera region and the other in the western corridor. There are a few mobile camps which are situated in the Grumeti (west) region throughout June, and couple this with a more permanent lodge in the Seronera region means you get the best of both worlds in terms of accommodation style, whilst also maximising your chances of seeing the herds. 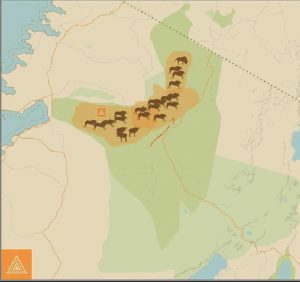 Which permanent camps to stay at in the central Serengeti (Seronera) for a June safari?

Kiota ($325 pppn before June 16th, $430 pppn after June 16th). This is an exceptional value property. Located in Seronera, with amazing views of the surrounding plains, it is exceptionally well positioned for the excellent central Serengeti resident wildlife. It is very comfortable with lovely staff and a very welcoming atmosphere.

Namiri Plains ($1,122 pppn). Namiri Plains is one of the best locations in the whole of the Serengeti in our view, migration or no migration. It is set in the eastern area of the park and with only one other camp in its vicinity, hardly any vehicles venture here. This does not mean its wildlife is less prominent by any means, but quite the opposite. As a former cheetah conservation area the big cats here are extremely good. Fine food, luxury tented accommodation in a magical area; you can’t get much better than this.

Dunia ($914 pppn). Another Asilia property, and one which we love to send couples and families alike to – it suits everyone, and the all-female staff create an incredibly welcoming and warm environment. Exceptionally well positioned in a quieter area of the Seronera region, with it’s excellent resident wildlife, it is a fantastic choice.

Which mobile camps in the western corridor to combine with a central Serengeti camp for a June safari?

Serengeti Safari Camp ($900 pppn). An office favourite. Moving between 3 locations throughout the year and with 2 mobile camps, Nomad Tanzania’s passion of exceptional safaris shines through in everything they do… Safari mad but without compromising on quality one little bit, Serengeti Safari Camp is unbeatable for an authentic Serengeti safari.

Ubuntu ($768pppn) Asilia’s best value mobile camp, Ubuntu is similar in style to Serengeti Safari Camp and in an equally excellent location at this time of year. A fabulous choice for a barefoot luxury tented safari experience.

Serengeti Under Canvas ($885 before 15th June, 1240 after 15th June)  – The premium option if you are looking at staying under canvas in a tented camp, but also do not want to compromise on quality.

Which permanent camps in the western corridor to combine with a central Serengeti camp for a June Safari?

Okay, so this is where things get a bit different in terms of Serengeti accommodation. In the western corridor, the area of Grumeti is actually a private reserve owned by Singita, a luxury company who have properties all over the continent. Singita are the crème de la crème of safari camps. Their private reserves mean that (especially in the rainy season) you really will not see any other vehicles. The guiding is exceptional, the food delicious and the accommodation out of this world luxury but without compromising on the intimacy which a mobile tented camp offers. However, you do pay a premium!

Sabora – (1475 pppn). 1920’s themed, Sabora is a magical place to base yourself. With day beds set out in the bush, and in an area where game often passes casually through camp, it is a seriously spoiling tented experience. It also has a pool (of course), and a gym!

Sasakwa – (1,615 pppn). A raised lodge with sweeping views and all the amenities you could ever wish for, Sasakwa is a grand old home away from home. Singita standards throughout, it is for those who love old school and want to pay a premium.

Faru Faru – (1475 pppn). A little like Sasakwa but with a modern twist, Faru Faru is an exceptional property with all the permanent luxuries you could wish for. It is probably Singita’s flagship Tanzania property.