Where are the herds in December?

December is a notoriously tricky month to predict. The November short rains disperse the wildebeest herds across the Serengeti as they head south in preparation for calving season, which kicks of towards the end of the month and lasts through until March. Generally, the main herds may linger in Namiri Plains (just south east of the central Serengeti region, Seronera) or in Kusini which is towards the south west of the central area. Some as early as December may have already made it to the fertile Ndutu plains in the Ngorongoro Conservation Area in preparation for calving season.

Is December a good time to see the Great Migration?

December is a very popular time to be in Tanzania, due to the beginning of the calving season, but also because East Africa (Kenya and Tanzania) is by far the best place to be in Africa over the festive period as it is mainly dry and the wildlife is excellent. This means that although December is a somewhat transitional month for the migration, the park is still going to be busy with tourists seeking an adventurous Christmas period (but only towards the end of the month)! If you want to avoid the crowds and peak season prices, go before the 20th December.

Because of the November rains, the wildebeest disperse as they have plentiful grass to eat so you are less likely to get those huge condensed herds which are so fabulous in the dry season. If your dates are slightly more flexible look at early December to avoid peak, peak season prices which you get from around 20th December up until the 7th of January and also to avoid the Christmas crowds. If The Great Migration herds are your absolute priority and you are looking for a wintery break but have flexible dates, to get the most dramatic condensed Migration scenes, you should look to February. February is the only month when the herds are ALWAYS where we think they will be, in the Ndutu area of the Ngorongoro Conservation Area.

So, where should I stay to get the best chance of catching the herds in December?

We would say that from 1st – 15th December you should be looking at the areas in the central Serengeti region. You could look at either Moru (just south of the centre), Kusini (further south west of the centre) or in the Seronera region itself (the centre!) where the more permanent camps are located (ones which stay here throughout the year, and do not move locations to follow the migration). As December is a more transitional month and the herds tend to be scattered across central and into the southern Serengeti, it is important not only to consider where the migration may or may not be, but also what style of camp suits you the most. For the later dates in December, we would urge you to consider two locations – one in the central Serengeti area (as above) and another in the Ndutu area of the Ngorongoro Conservation Area (very south of the park), for a chance of catching the start of calving season. Here are our picks for the best camps to stay in for the Migration in December… 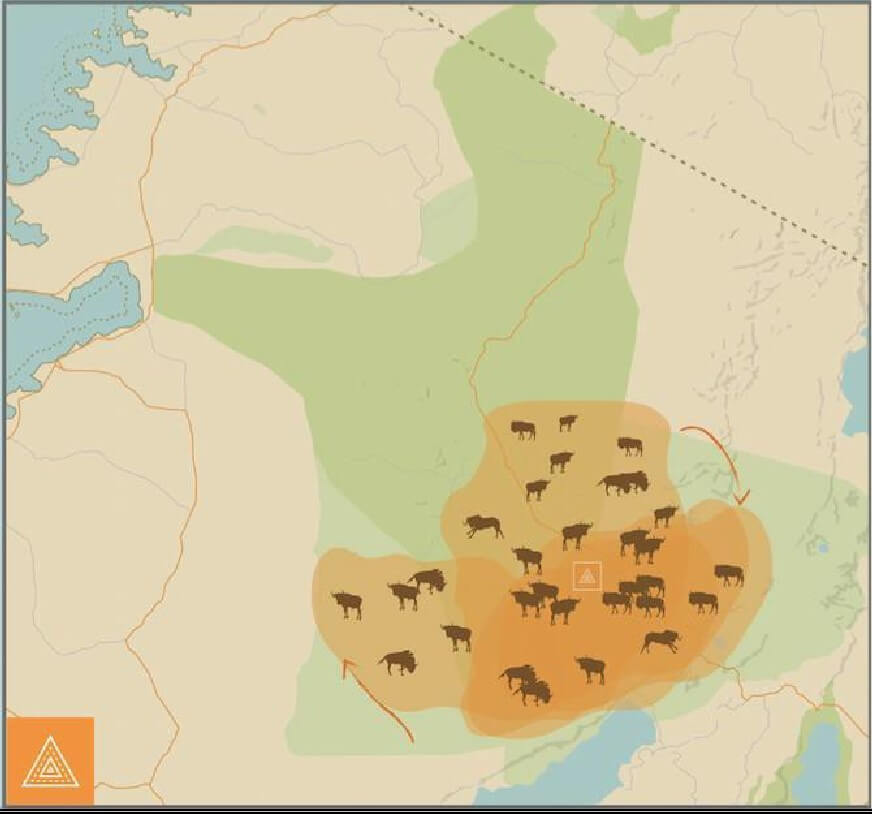 Which camps to stay in for an early December central Serengeti Safari ?

Kiota ($325 pppn until 19th Dec, where rates increase to $515 pppn!). As you can see, this is an exceptional value property and going in early December means a seriously good value safari. Located in Seronera, with amazing views of the surrounding plains, it is exceptionally well positioned for the migration in the transitional months, as well as benefitting from the excellent central Serengeti resident wildlife. It is very comfortable with lovely staff and a very welcoming atmosphere.

Namiri Plains ($893 pppn until 19th Dec, where rates increase to $1208 pppn). Namiri Plains is one of the best locations in the whole of the Serengeti in our view. It is set in the eastern area of the park and with only one other camp in its vicinity, hardly any vehicles venture here. This does not mean its wildlife is less prominent by any means, but quite the opposite. As a former cheetah conservation area the big cats here are extremely good. Fine food, luxury tented accommodation in a magical area; you can’t get much better than this.

Dunia ($804 pppn until 19th Dec, where rates increase to $914 pppn). Another Asilia property, and one which we love to send couples and families alike to – it suits everyone, and the all-female staff create an incredibly welcoming and warm environment. Exceptionally well positioned in a quieter area of the Seronera region, with it’s excellent resident wildlife, it is a fantastic choice.

Which camps to stay in for a late December Serengeti safari in Ndutu?

Combine one of the above camps with a mobile camp. It is a nice idea to combine a more permanent camp in the central areas (of which there are a few excellent ones), with a mobile camp in the south to give variety in accommodation. Uniquely to the south, there are not any permanent camps, so to stay here you must go mobile, which we would urge you to do anyway, as there is nothing quite like a piece of canvas between you are the wild Serengeti plains.

Chaka ($330 pppn until 19th Dec, where rates increase to $457). Sister camp to Kiota and with the same ethos of very comfortable accommodation and an excellent overall experience in great locations, at an amazing price; you can’t go wrong with Chaka.

Serengeti Safari Camp ($725 pppn until 20th Dec, where rates increase to $900 pppn, as well as 7 for 5 and 5 for 4 deals throughout the month). An office favourite. Moving between 3 locations throughout the year and with 2 mobile camps, Nomad Tanzania’s passion of exceptional safaris shines through in everything they do… Safari mad but without compromising on quality one little bit, Serengeti Safari Camp is unbeatable for an authentic Serengeti safari.

Ubuntu ($664 pppn throughout the whole of December). Asilia’s best value mobile camp, Ubuntu is similar in style to Serengeti Safari Camp and in an equally excellent location at this time of year. A fabulous choice for a barefoort luxury tented Serengeti safari.

Alex Walker’s Serian (1,110 pppn) – Luxurious food, service and tents but with a really classic safari style. A huge perk of Serian is that your price includes a private vehicle and guide for your whole stay. Serian has two camps at this time of year, one in the Kusini region of southern Serengeti (Serian Kusini, to the slightly north and west of Ndutu) and another even south of this, deep into the Ngorongoro Conservation Area called Serian South. One thing to consider is that Serian South is not in the national park which means you can enjoy walking, cultural visits as well as fly camping…

Serengeti Under Canvas ($885 pppn until 20th Dec, where rates increase to $1,240). &beyond’s Serengeti mobile camp, this is a very luxurious tented option and for those who don’t mind splashing out on a premium experience. (It doesn’t have to be splashing out a huge amount if you go in early December!).

Olakira ($789 pppn until 19th Dec, where rates increase to $971pppn). Asilia’s most luxurious mobile camp, it is not quite as glitzy as Serengeti Under Canvas but by no means is a less desirable option as it’s price tag is a bit less!

Great, thanks for the options… What would you do in December though?

Early December – I would spend a good 4/5 nights in Namiri Plains for explosive predator action, and also be in with a good chance of catching the migration. For lower budgets, Kiota is the one. Dunia is beautiful, but Namiri’s location means you really do escape the crowds of central Serengeti and also benefit from the ASTONISHING amount of resident cats.

Late December – I would begin my Serengeti time in Serengeti Safari Camp for an unbeatable overall safari experience, and an exceptionally well ran camp. I would spend 3 nights here then hop over to Namiri for the same reasons as stated above. If I was on more of a budget, I would have absolutely no problems with doing a Chaka and Kiota combination for exceptional locations for half the price of SSC and Namiri.