This was a mega trip, I visited both the North and South of Tanzania, as well as a hop over to Zanzibar.

Consisting of the Ngorongoro Crater and the Serengeti, the North of Tanzania is rightly justified as one of the best game viewing areas in Africa. Home to the Great Migration and a wonderful density of Big 5 animals, you can see why people flock here.

Comprising of the massive Selous Game Reserve and Tanzania’s largest National Park, Ruaha, both offer completely different experiences in terms of game viewing and their landscape. 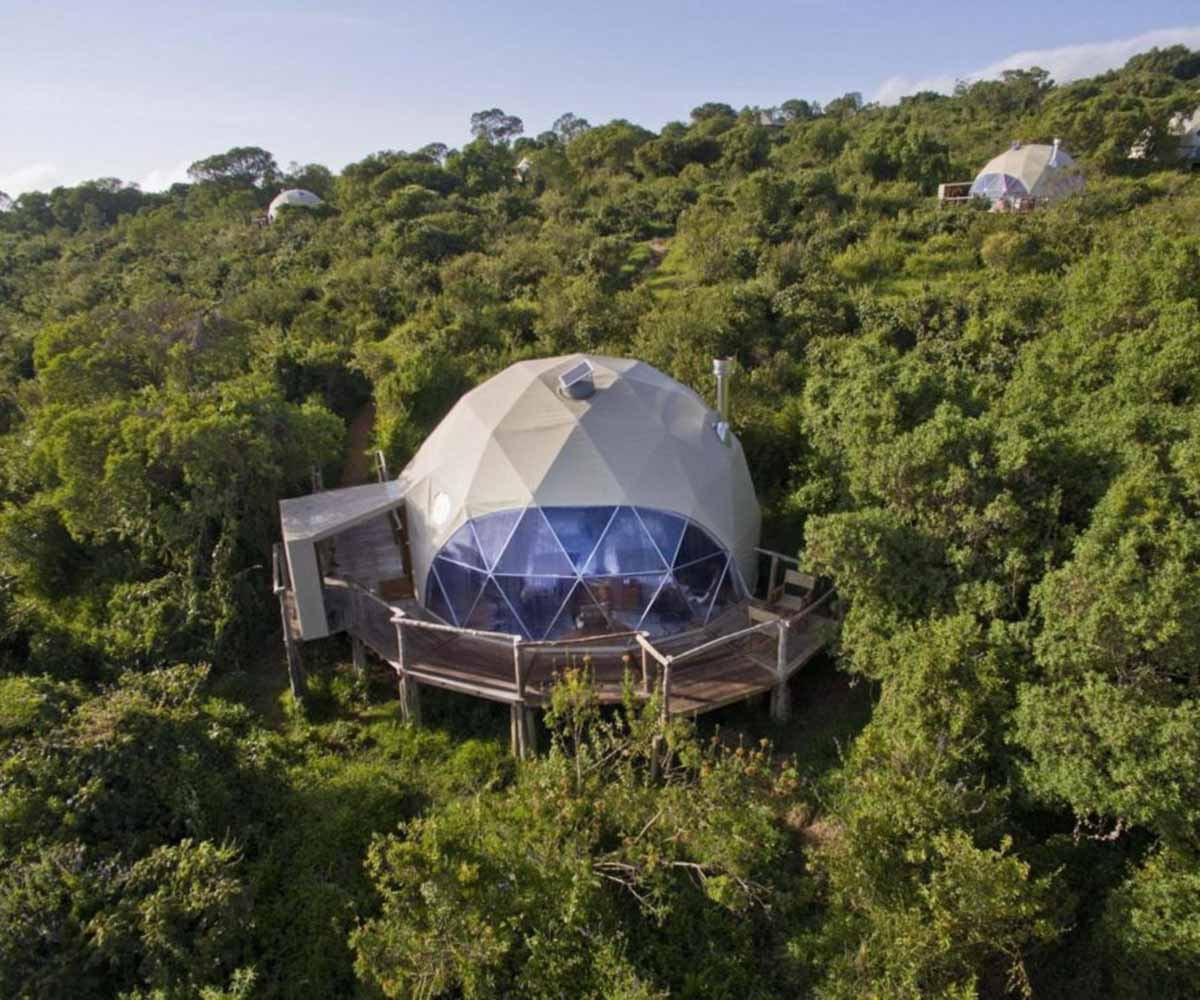 After a night in Arusha at Rivertrees, my next stop was Asilia’s The Highlands. This completely unique bubble-like room makes for a wonderful first stop on a trip. It has beautiful views looking into the Olmoti Crater and provides the opportunity to visit the Ngorongoro Crater and the surrounding Masai Villages. Although it gets chilly at night up there, the log fire in your room burns until sunrise, keeping your room nice and toasty. Asilia’s service and hospitality were impeccable and although there is a long road to the Highlands, it is worth every second. 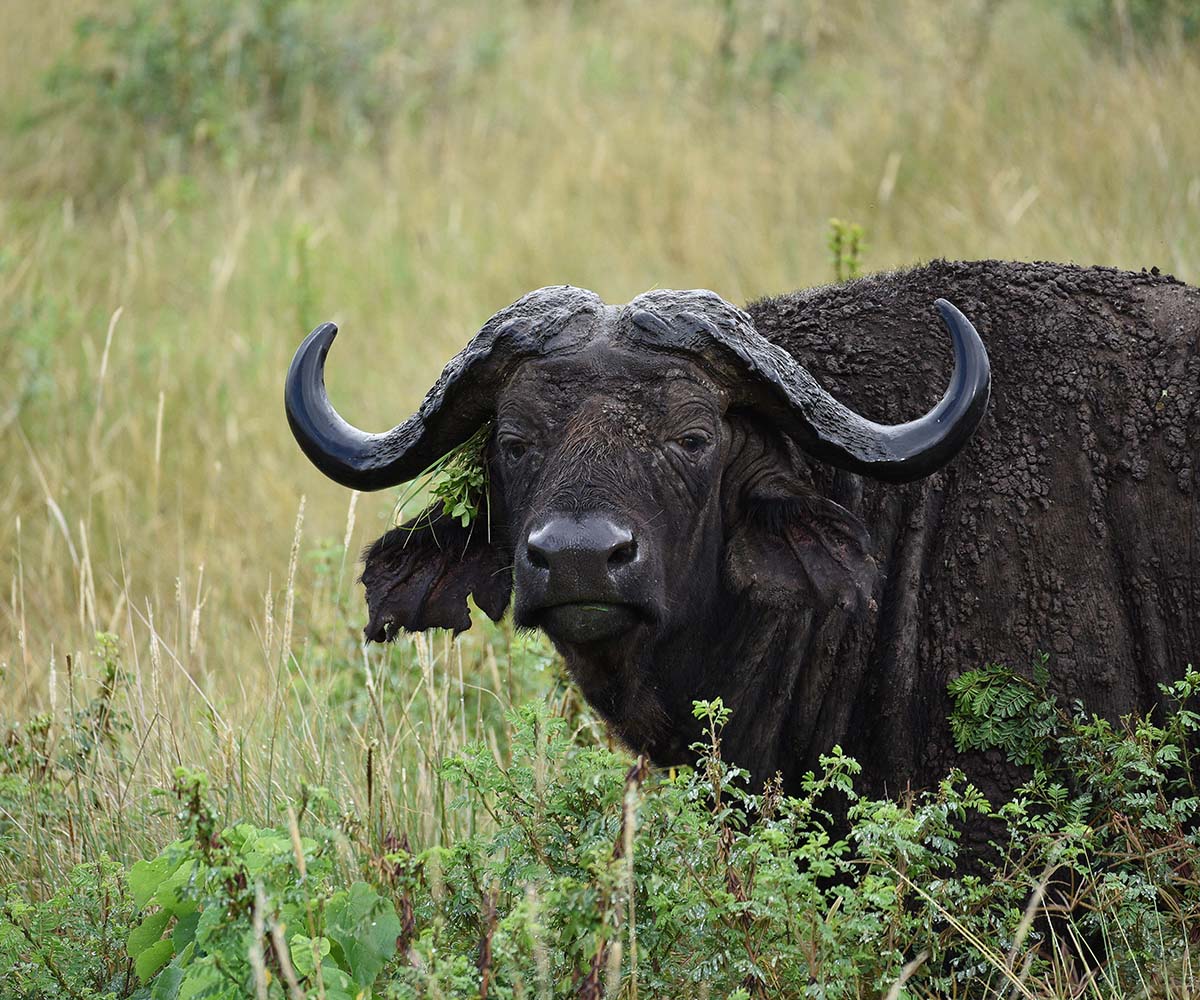 Buffalo in the Ngorongoro Crater.

Exploring the famous Ngorongoro Crater is something many people dream of, and with its plethora of animals, you can see why. After descending into the Crater, there is a realisation that this micro-habitat is unlike anywhere else in the world. Thankfully, due to the time of year, the Crater wasn’t too busy with vehicles and it made for a great start to the trip. 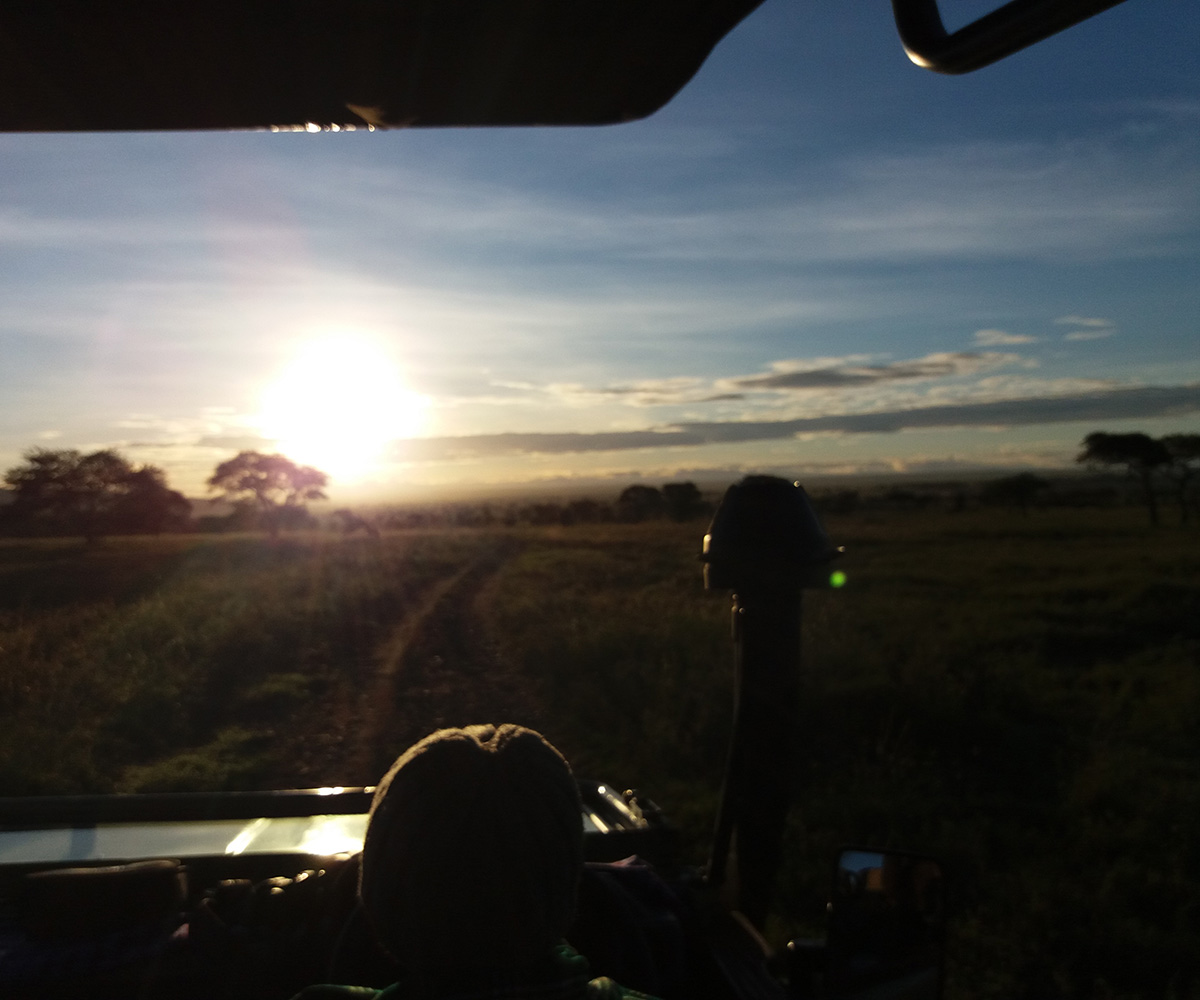 Exploring in an open-sided vehicle in the Serengeti.

After the Crater had been explored, I went back to the Highlands for the night before a flight the next morning took me to the home of the Greatest Wildlife Spectacles on Earth: the Serengeti. 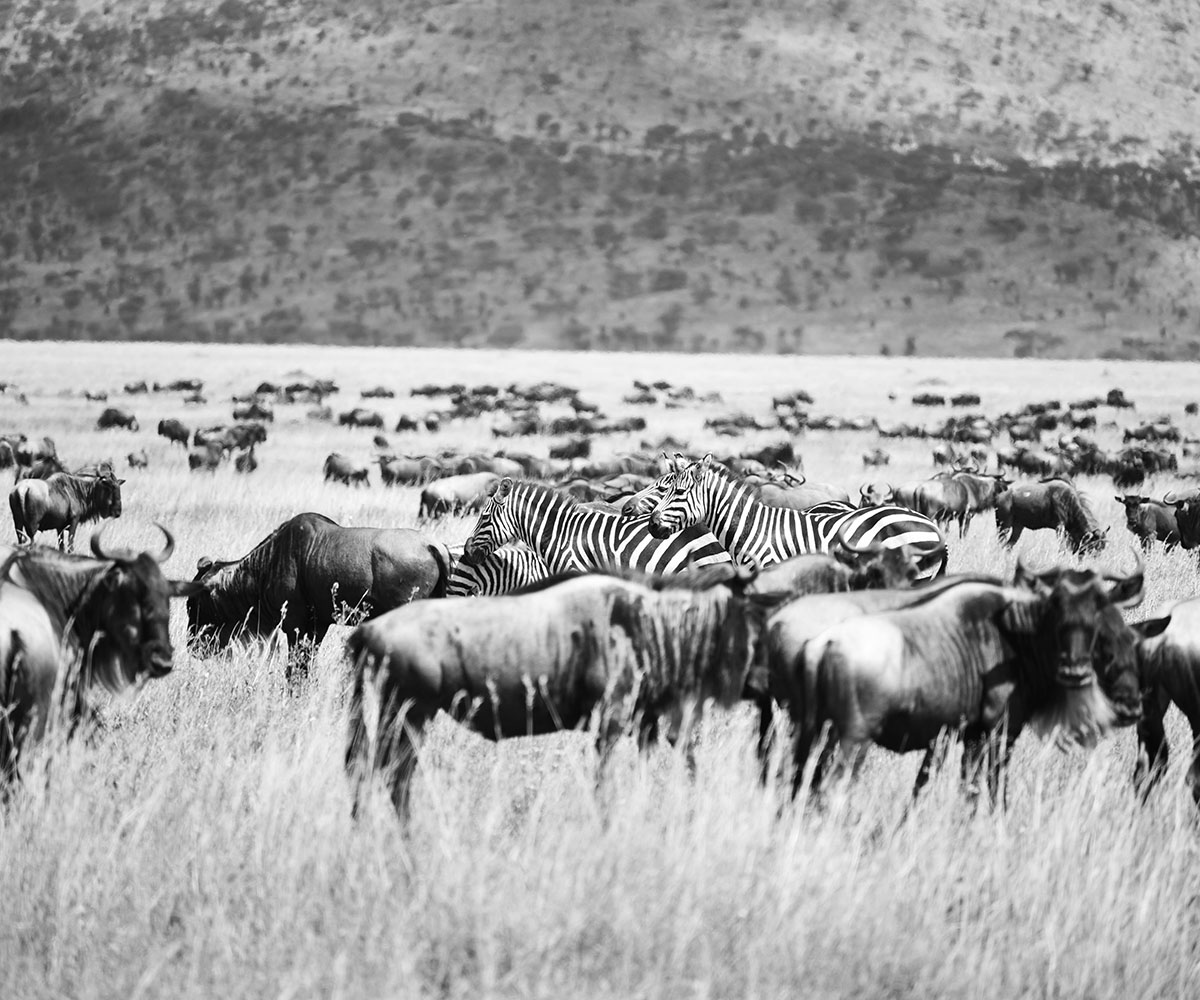 Thousands of wildebeests and zebras dotted the grassy plains of the Serengeti.

As the plane descended towards Seronera Airstrip in the central Serengeti, I could see thousands of black dots in the distance – wildebeest.  As it was the end of May, a lot of the migration was on the move through central area of the Serengeti, making its way to the West or heading straight North. 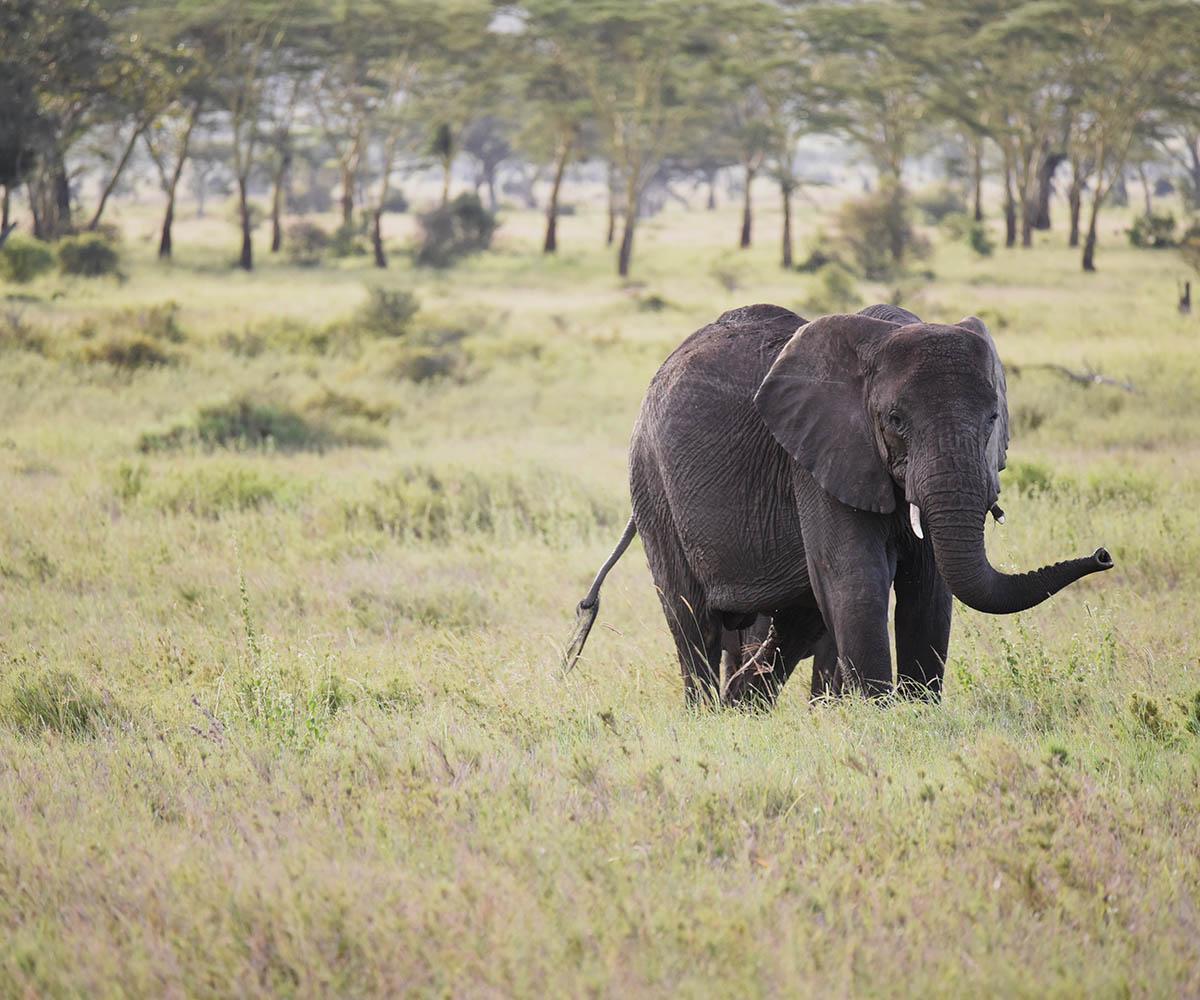 Elephant near the Moru Kopjies of Seronera.

The central Serengeti area varies considerably in habitat, from open grassy plains, acacia woodlands and rocky outcrops, which means it is fantastic for a diversity of wildlife. After staying at numerous camps including  Kiota Camp, &Beyond’s Serengeti Under Canvas, Asilia’s Dunia and Nomad’s Serengeti Safari Camp, I was lucky enough to spend hours amongst the herds of travelling wildebeest and witness some brilliant sightings. 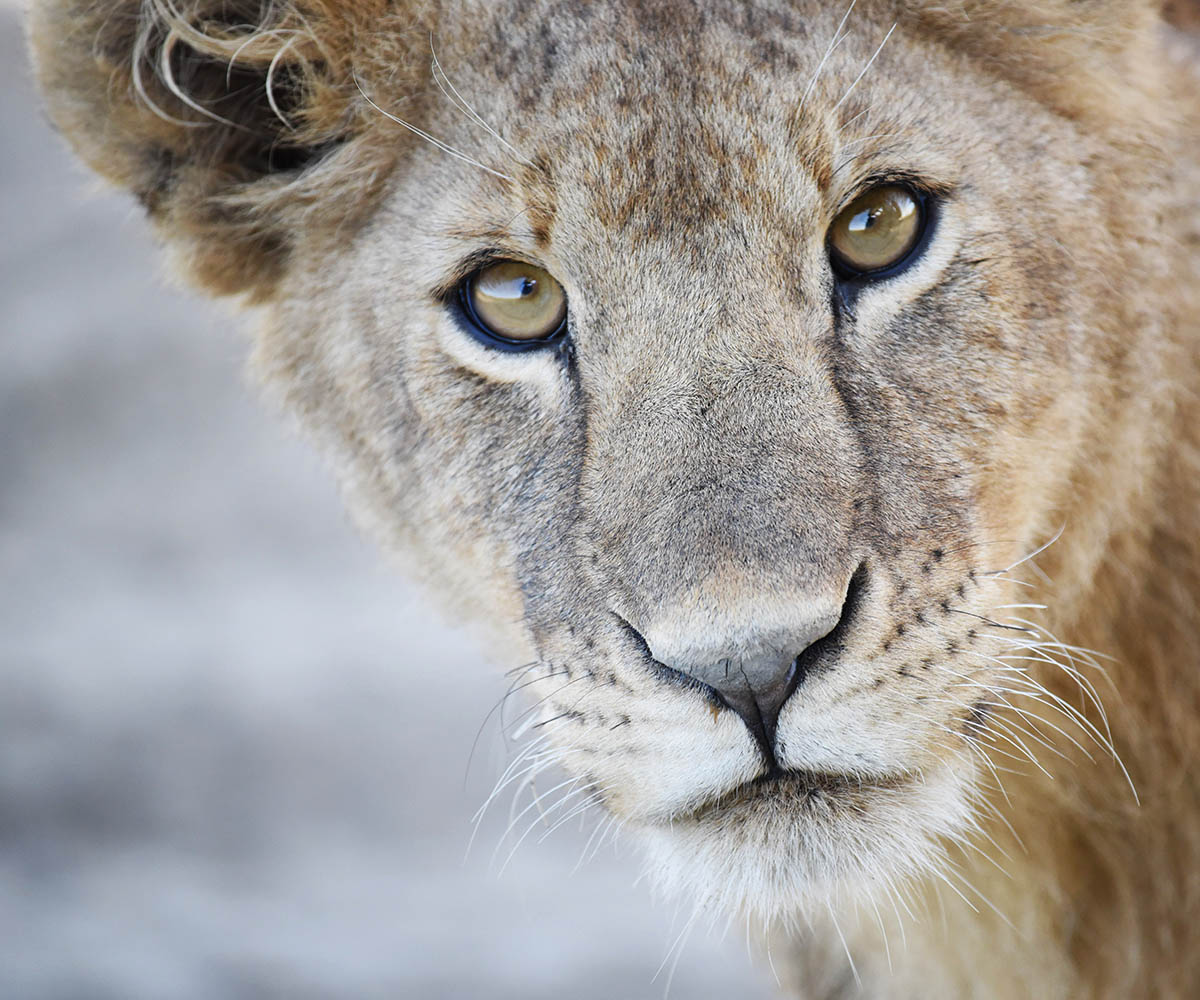 Famed for its predator density, Asilia’s Namiri certainly didn’t disappoint. Located an hour and a half from any other camp, Namiri is optimality positioned for secluded and intimate sightings. After following a cheetah mother and her adolescent cubs for over an hour, a large herd of Thompsons Gazelle came into view as they decided to quench their thirst in the mid-morning heat. With telepathic-like communication, the cubs sat in the grass whilst their mother hunkered down and edged closer to the unsuspecting antelopes. She waited, and so did we. 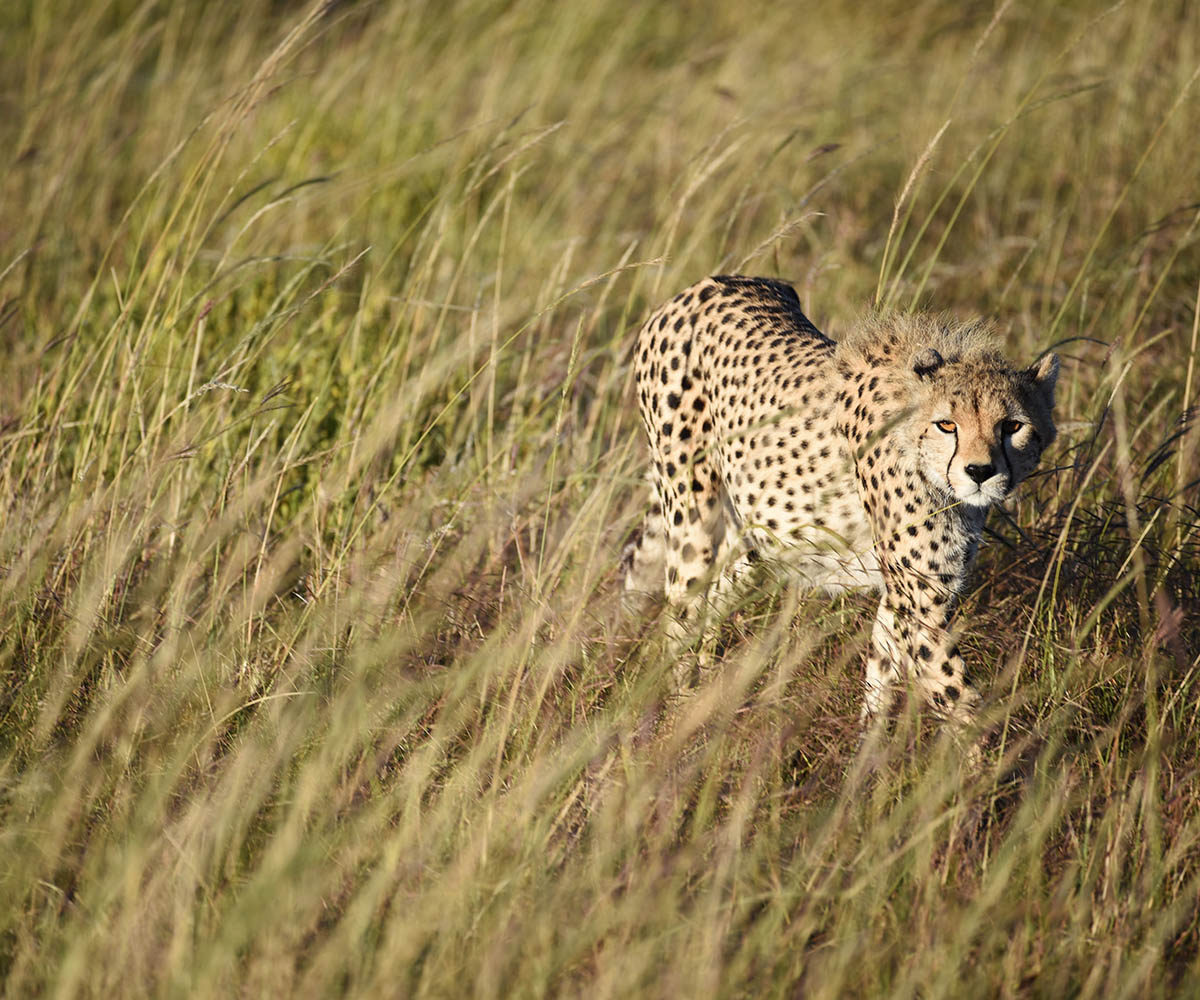 The minutes ticked by and the gazelles that had finished drinking started to make their way towards the cheetah. The first ten or so walked obliviously by her, she coiled herself, muscles taught, ready to pounce.  In a split second the target was made and unravelling her long slender body, she gave chase. It lasted no more than a split second, but the cheetah’s front paws struck the back legs of the ‘tommie’ and sent it cartwheeling. Grabbing the dazed gazelle by the throat, it seemed as though the cheetah had won herself and her cub’s breakfast. Nature had other ideas though. From the long grass appeared a spotted hyena, bloodied mouth and rounded belly suggesting a successful morning of scavenging, yet there was more food on offer here. Cackling as it did so, the hyena gave chase towards the cheetah. The cat dropped her morning’s prize and ran with her cubs up the nearest tree. Before the hyena could react, the gazelle jumped up and ran off to join the rest of its herd. With no food on offer and the cheetahs now out of reach, the hyena sauntered off into the distance. 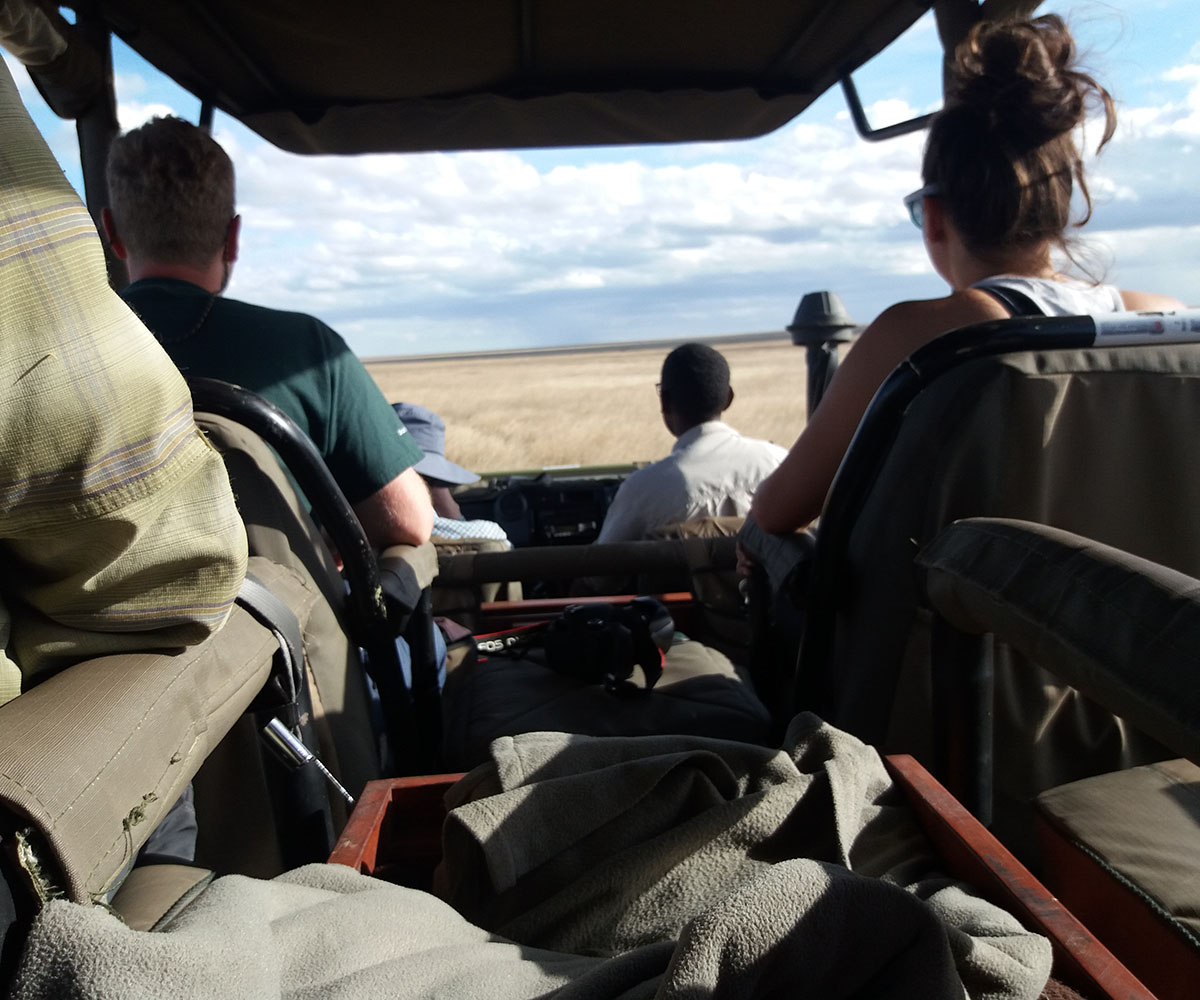 On the lookout for predators at Namiri.

Namiri brought the end of my Serengeti trip to a fantastic close, however there was still plenty of wildlife awaiting me in the South of Tanzania.

Before heading to the wild and untamed parks of Southern Tanzania, a trip to Zanzibar was first on the list. Stone Town was the first port-of-call and a night or two here was more than enough with the Park Hyatt being the pick of the places to stay. 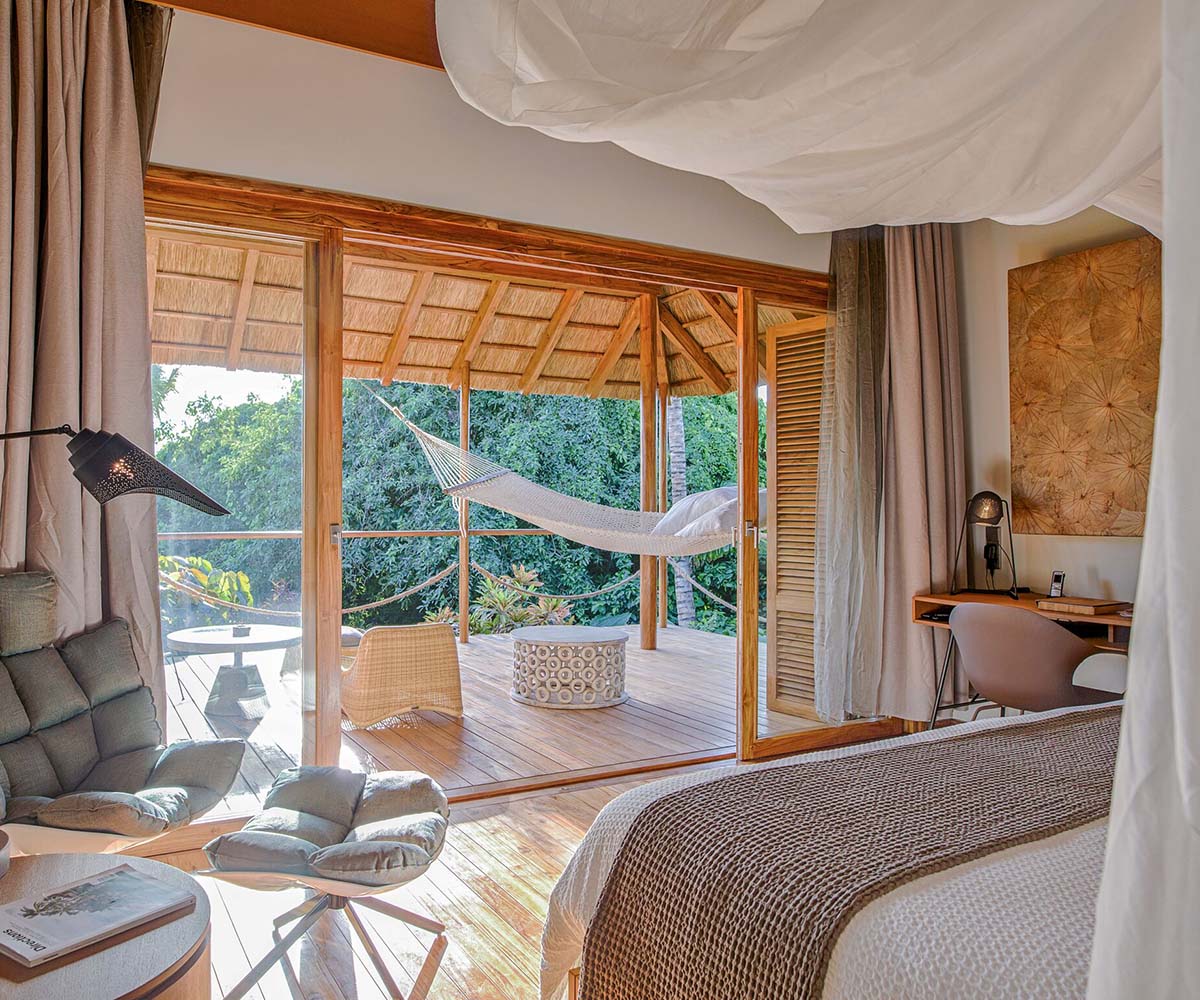 Towards the Coastline there are hundreds of different options available and knowing where the best beaches are is vital to enjoying your beach retreat on Zanzibar. Zuri arguably had the best beach and is great for honeymooners and families alike, its only downside is that it is quite large with over fifty rooms, but the beach certainly makes up for this. Xanadu is luxurious and elegant and perfect for couples whilst White Sands and Breezes are both perfect for the whole family. Zanzibar was the perfect place to relax after a busy Serengeti safari.

My next stop was the Selous. From the air, pods of hippos could be seen submerged in the murky pools and the vein-like waterways made me feel as though I was flying over the Okavango Delta. Apart from being far cheaper than its Botswana counterpart, the Selous is also home to a plethora of wildlife. The beauty here are the boating safaris, where meandering along the water allows up close and personal encounters with a variety of bird life, aquatic dwelling mammals and of course the prehistoric reptiles that call the water their home. Siwandu has a wonderful solar powered engine in its boats which allows you to silently glide through the water. 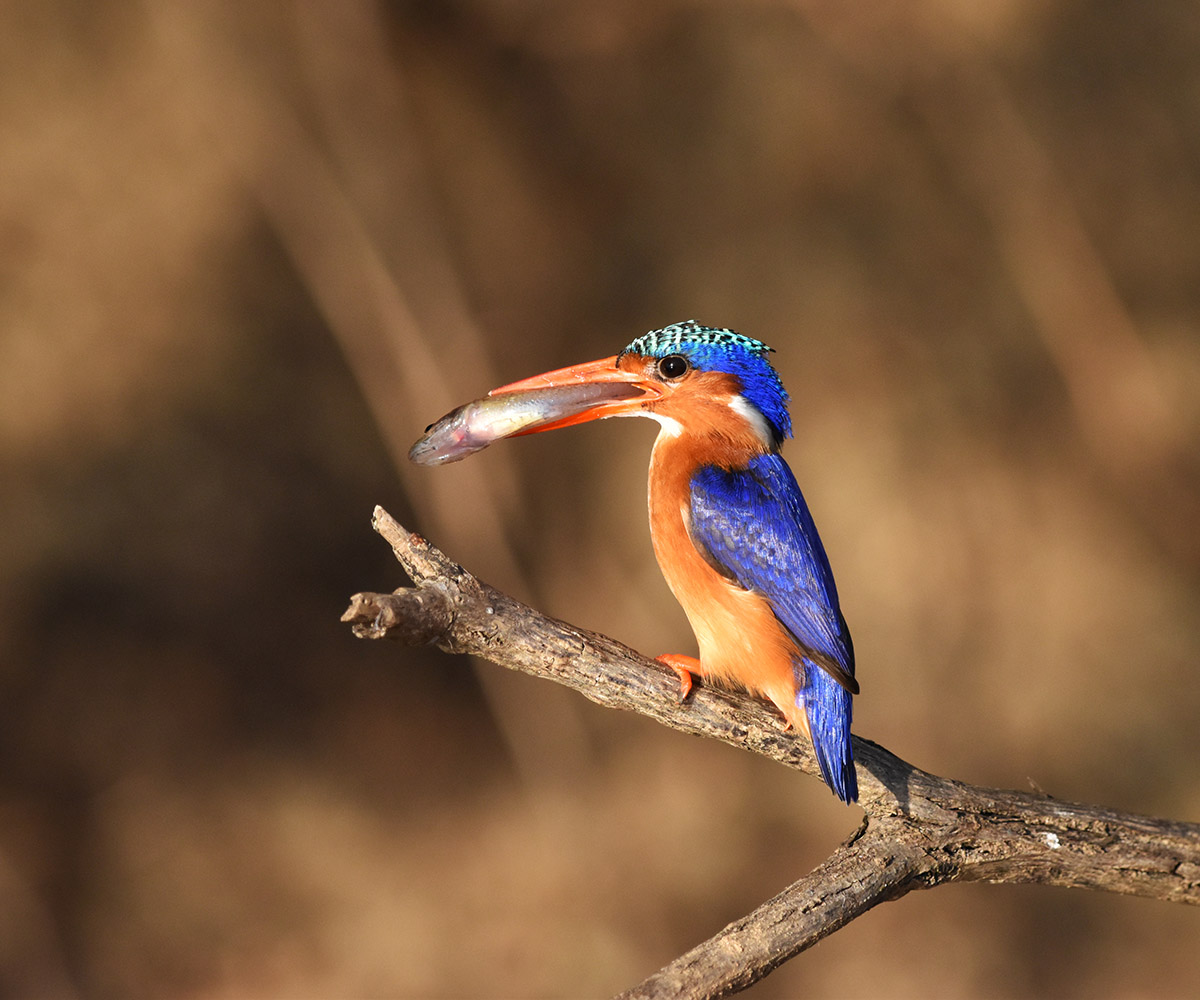 The silent boat allowed for a perfect opportunity to photograph this malachite Kingfisher.

On land, the Selous still delivers. It isn’t as abundant in numbers as the Serengeti, but the off-roading here allows for sightings to be of the highest quality. One morning at Nomad’s Sand Rivers we came across a pair of mating lions and due to the relaxed rules, we could off-road to keep up with their antics. 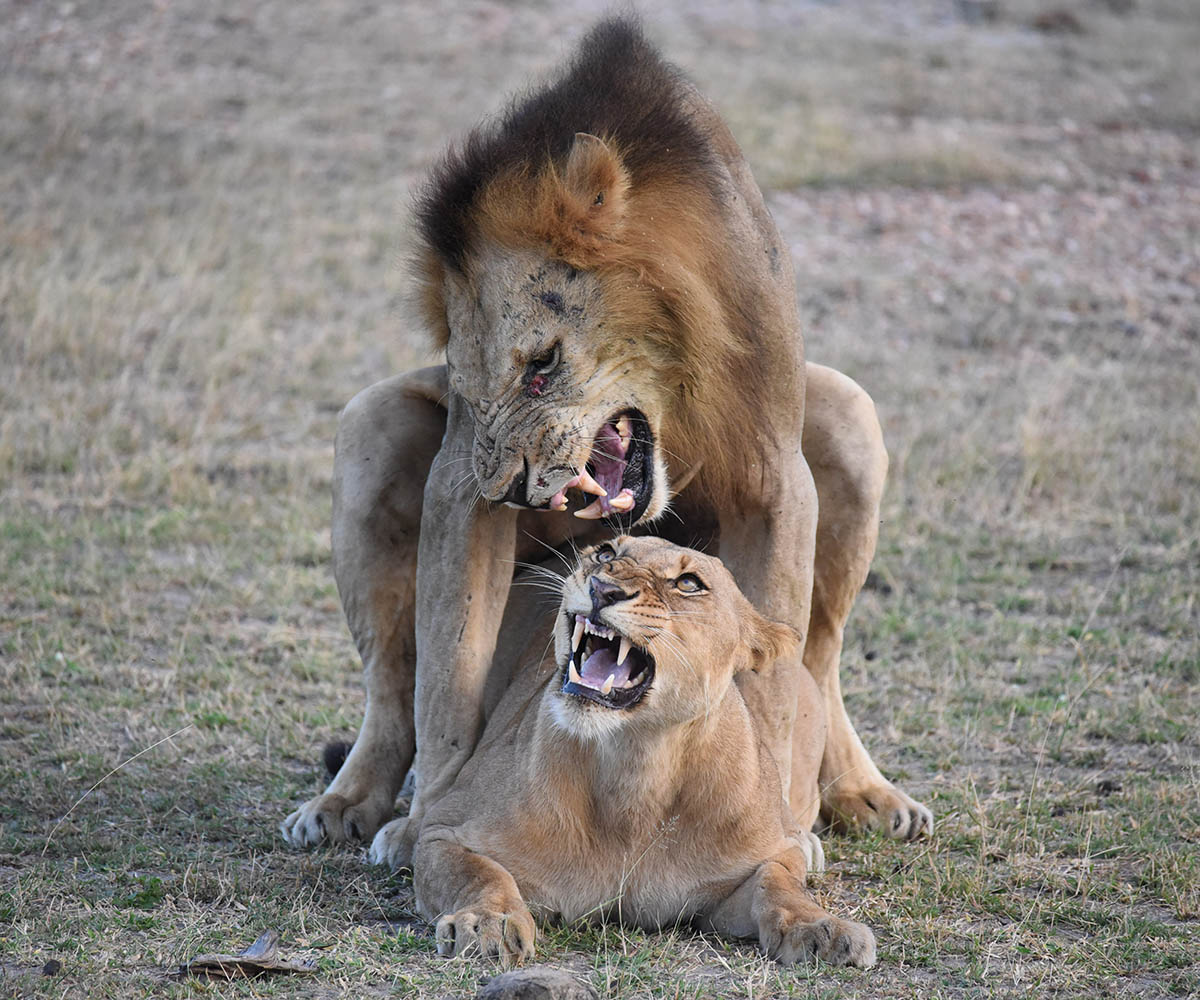 Mating lions in the Selous.

The evening before, the off-roading has been even more beneficial as we followed a small pack of wild dogs through the thick foliage as they sought something to hunt. The small number of lodges and the vast expanse that the Selous covers results in very personal and intimate sightings that don’t feel rushed. 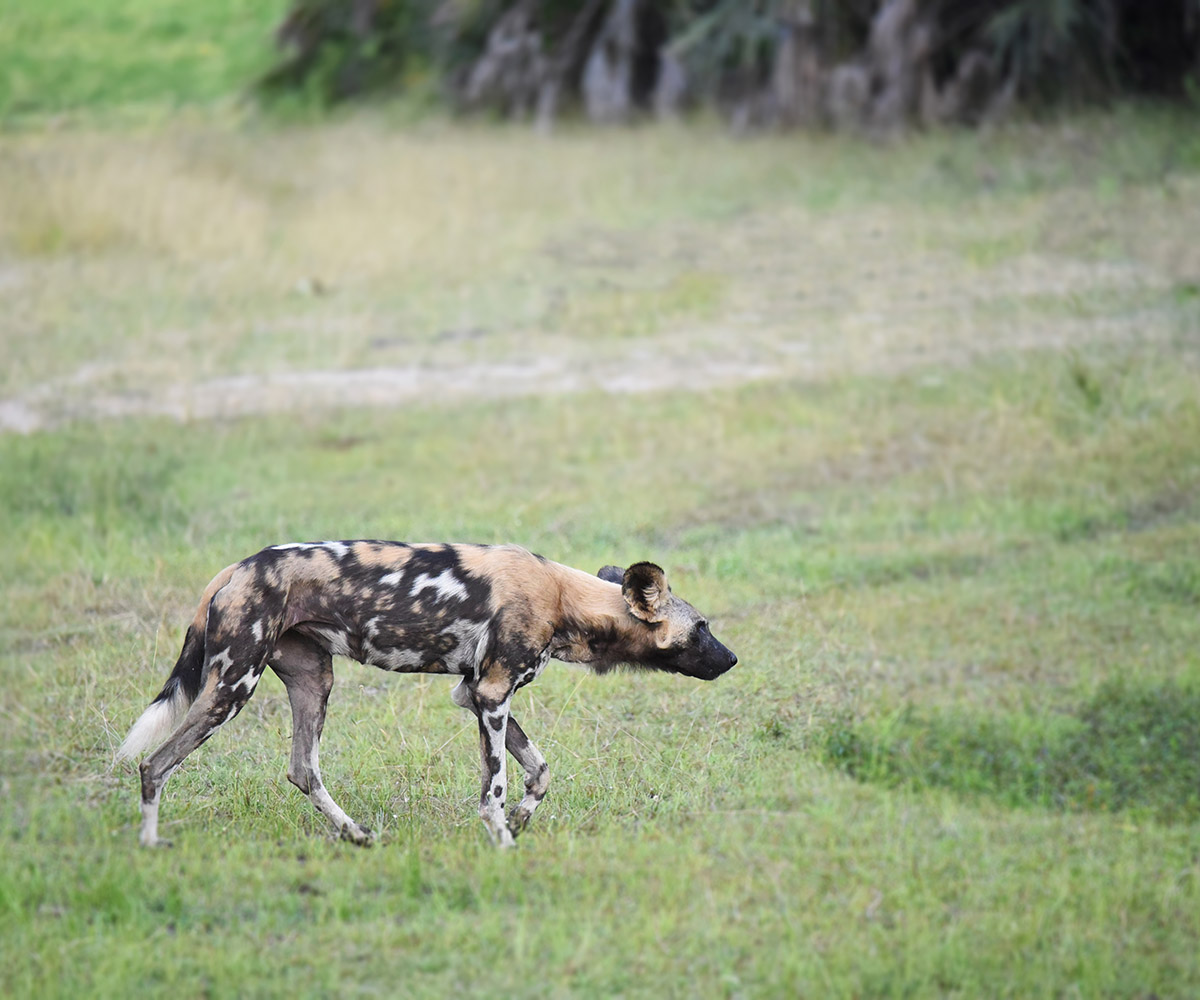 Wild dog in the Selous.

Ruaha was a stark contrast to the wet and lush landscape of Selous. The rainy season hadn’t been too productive so although I arrived in June, the landscape mirrored that of late August. Ruaha is slightly bigger than South Africa’s famous Kruger and is Tanzania’s largest National Park. With only a handful of lodges here, there is a true ‘unexplored’ feel to it. 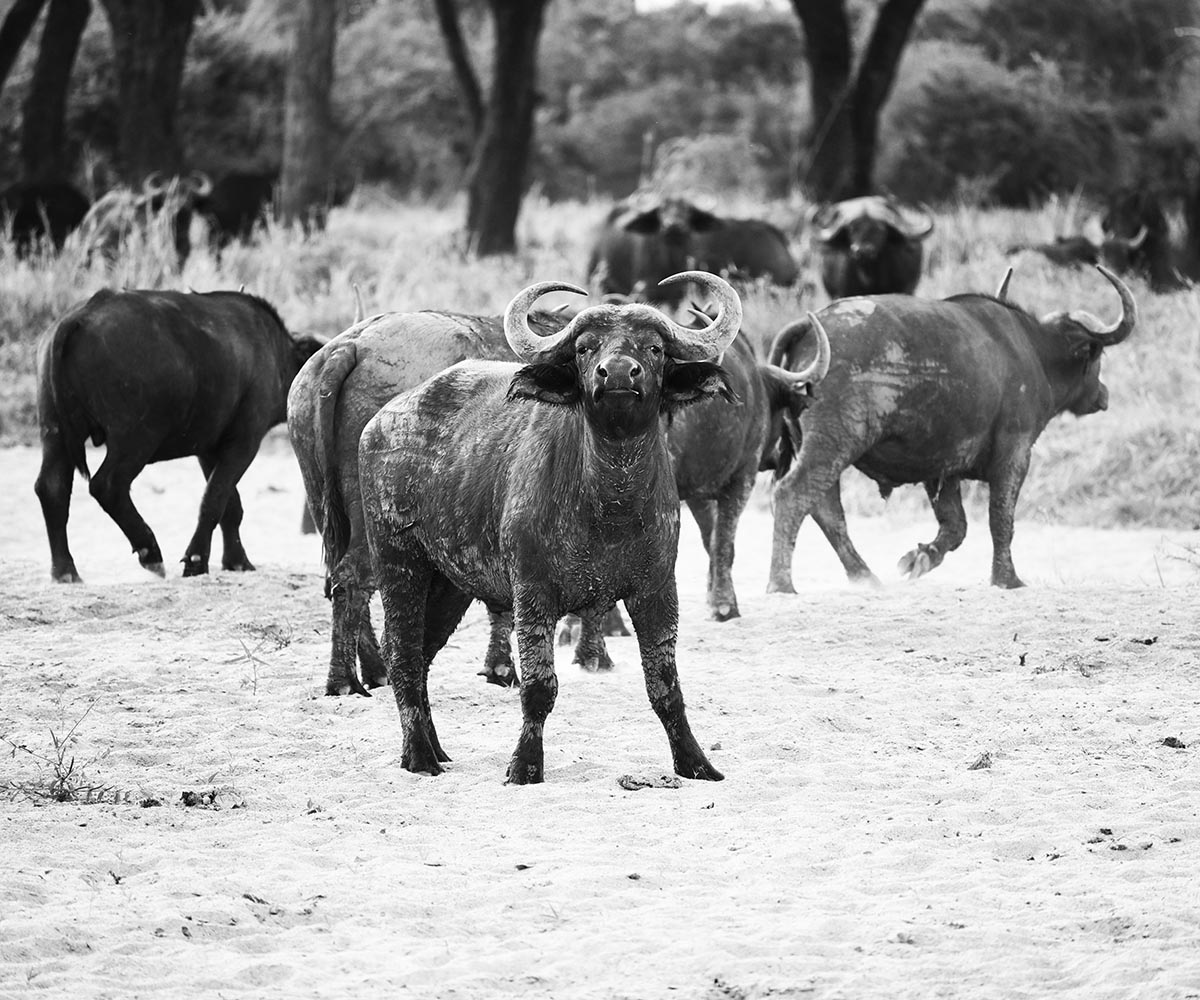 Buffalo congregate in their thousands in Ruaha National Park.

Jongomero in the South of the park is all by itself in an untamed pocket of wilderness. Over-looking a dry riverbed, wildlife is never far away here – demonstrated perfectly when a leopard walked straight past us whilst we tucked into our momentarily paused starter. With never-ending acacia woodlands and meandering dry riverbeds, the elephant and buffalo populations are staggering, and they become ever-more congregated as the dry season continues. 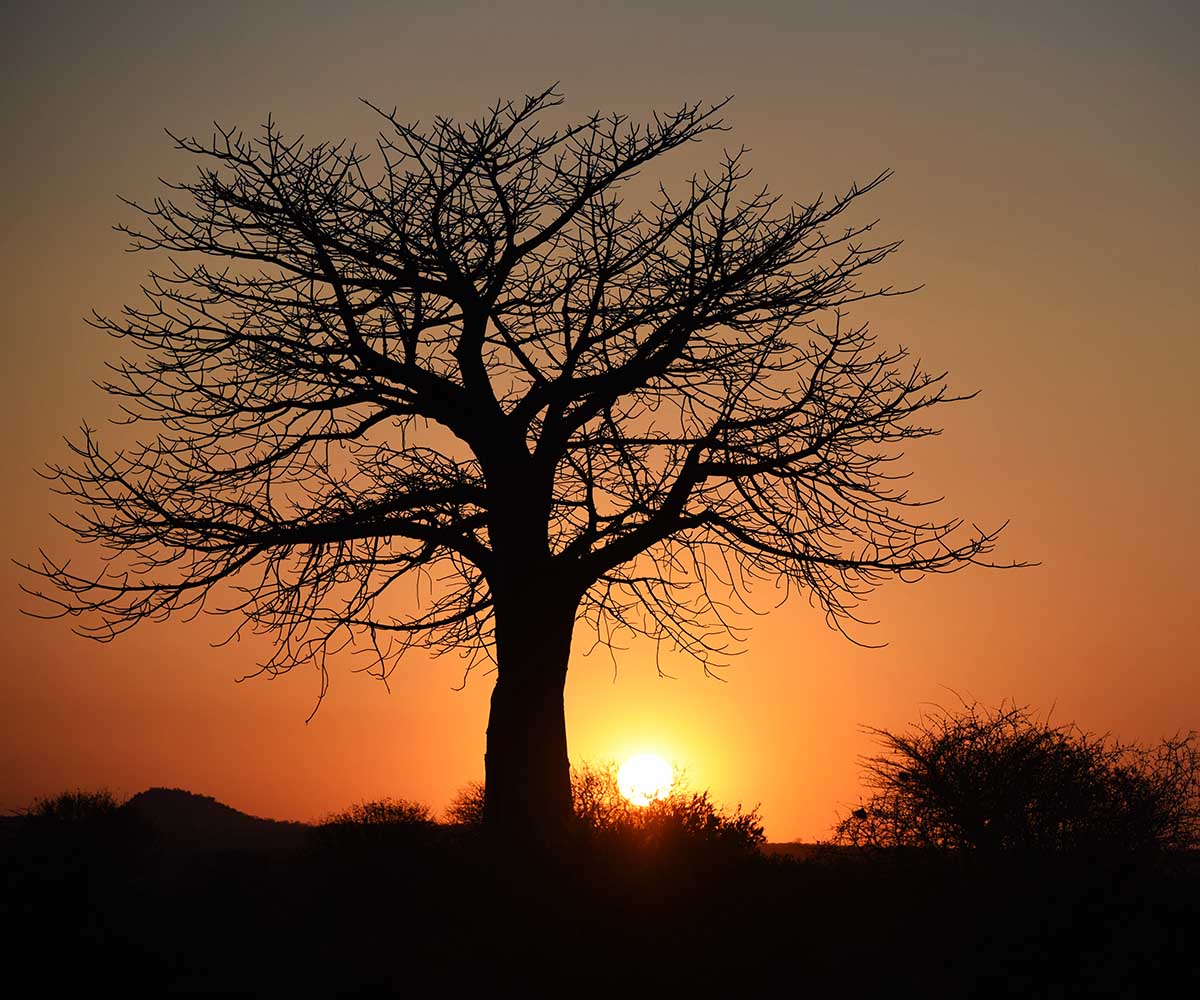 In the Northern section of the park, beautiful camps like Jabali Ridge and Ikuka blend perfectly into the rocky outcrops and the baobab studded horizons in which they were built. It is here where you will see the unique blend of Eastern and Southern African wildlife. I was lucky enough to see my first ever serval – something that had eluded me during my years of guiding – so this was something to get excited over. Other rare creatures such as African wildcat, lesser kudu and aardwolf are other mammals that would certainly intrigue those seasoned safari goers planning on visiting Ruaha. 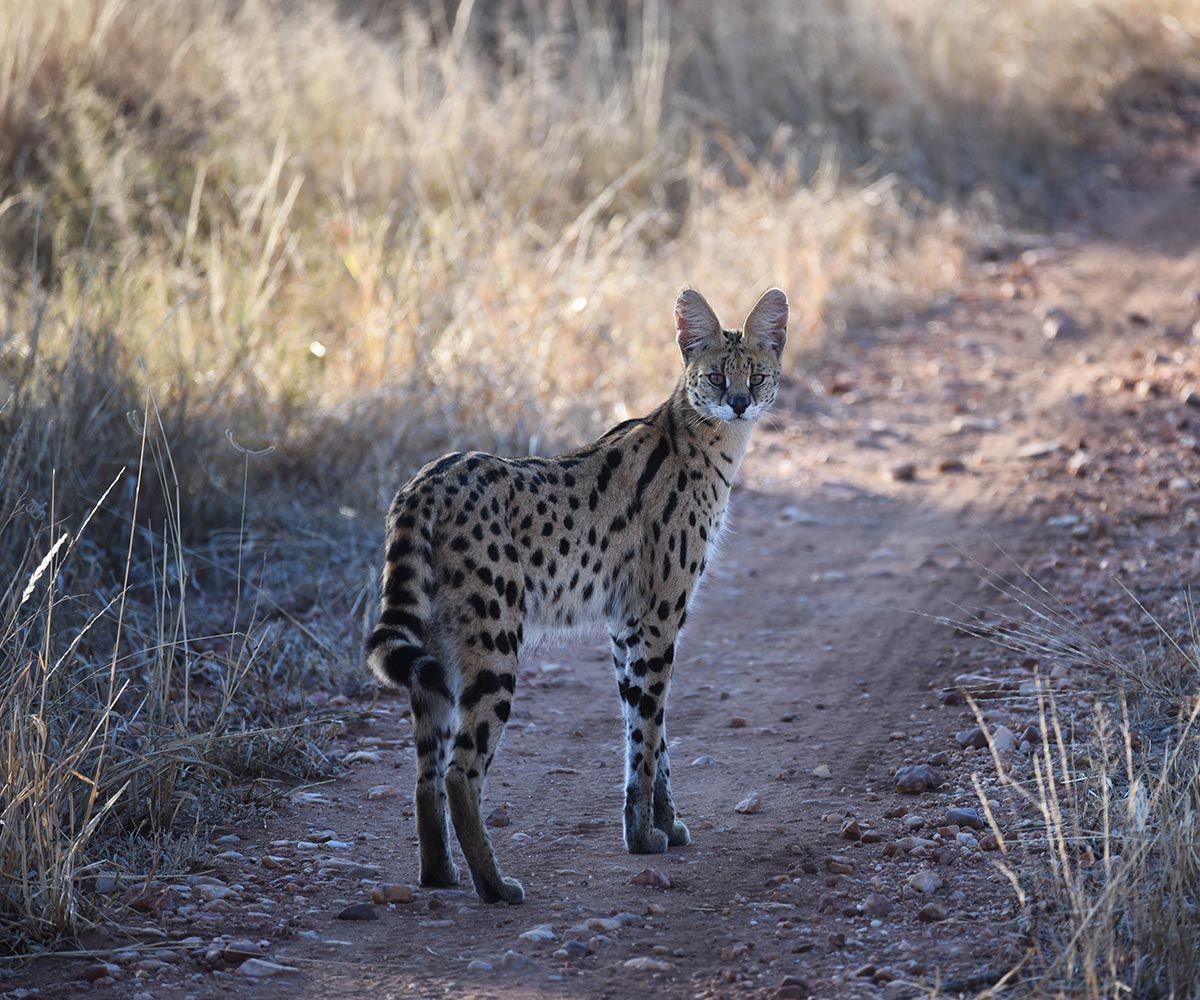 Serval’s are rare and always a thrill to find.

My final stop was a secluded beach lodge on Tanzania’s mainland. Ras Kutani was perfectly situated on a strip of beach next to a calm and serene lagoon. A couple of nights here snorkelling and kayaking, as well as relaxing on the sand was the perfect way to end a fabulous trip.

If you would like  more some ideas or advise for trip of your own, please feel free to contact us.